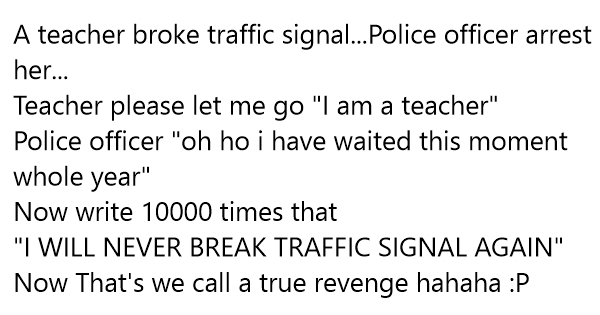 A man married a Lady Traffic police Inspector.
Friend: How was ur first night?
Man: She charged Rs 100 from me for Overspeed,
200 for wrongside entry and Rs 500 for no helmet :D

A driver was stuck in a traffic jam on the road outside Parliament, Delhi.

Suddenly, a man knocks on the window.
The driver rolls down the window and asks,"What's going on?"


"Terrorists have kidnapped the entire Indian Congress, and they're asking for a $100 million dollar ransom.
Otherwise, they're going to douse them all in petrol and set them on fire. We're going from car to car, collecting donations.

A Traffic Cop stops a Harley for travelling faster than the legal speed limit and he asks the biker his name and licence.

"Fred" he replies.
"Fred what?" the officer asks.
"Just Fred" the man responds.

The officer is in a good mood and thinks he might just give the biker a break and write him out a warning instead of a ticket. The officer then presses him for the last name to record on the warning.

The man tells him that he used to have a last name but lost it. The officer thinks that he has a nut case on his hands but plays along with it. "Tell me, Fred, how did you lose your last name?'"

The biker replies: "It's a long story, so stay with me.'
I was born Fred Dingaling. I know - a funny last name. The kids used to tease me all the time, so I stayed by myself, studied hard and got good grades.

When I got older, I realised that I wanted to be a doctor. I went through college, medical school, internship, residency and finally got my degree, so I was Fred Dingaling, MD. After a while I got bored being a doctor, so I decided to go back to school.

Well, the ADA (Aust Dental Assoc) found out about the VD, so they took away my DDS.

Then I was Fred Dingaling, MD, with VD.

Then the AMA found out about the ADA taking away my DDS, because of the VD, so they took away my MD leaving me as Fred Dingaling with VD. Then the VD took away my Dingaling, so now I am Just Fred."

A police motorcycle police officer stops a driver for shooting through a red light. The driver is a real piece of work, steps out of his car and comes striding toward the officer, demanding to know why he is being harassed by the Gestapo!

So the officer calmly tells him of the red light violation. The driver instantly goes on a tirade, questioning the officer's ancestry, sexual orientation, etc, in rather explicit and offensive terms.

The tirade goes on without the officer saying anything.

When the officer finishes writing the ticket he puts an "AH" in the lower right corner of the ticket. He then hands it to the 'violator' for his signature. When presented with his copy, he points to the "AH" and demands to know what it stands for.

The officer says, "That's so when we go to court, I'll remember that you're an arsehole!"

Two months later they're in court. The 'violator' has a bad driving record with a high number of points and is in danger of losing his licence, so he hired a lawyer to represent him.

On the stand the officer testifies to seeing the man run through the red light.

Under cross examination the defence attorney asks; "Officer is this a reasonable copy of the ticket that you issued to my client?"

Officer responds, "Yes, sir, that is the defendant's copy, same number at the top."

Lawyer: "Officer, is there any particular marking or notation on this ticket you don't normally make?"

"Yes, sir, in the lower right corner of the narrative there is an "AH," underlined."

"What does the "AH" stand for, officer?"

"Officer, are you sure it doesn't stand for arsehole?"

"Well, sir, it looks like you know your client better than I do!"

Q-What did the traffic light say to the car?
A-Don't look, I'm changing

A traffic police officer, talking in a noisy place, is trying to give a telephone number to the dispatcher.

An older woman gets pulled over for speeding…

Older Woman: His body parts are in plastic bags in the trunk if you want to see
The traffic cop looks at the woman and slowly backs away to his car while calling for back up. Within minutes 5 police cars circle the car. A senior officer slowly approaches the car, clasping his half drawn gun.

Older Woman: Yes, here are the registration papers.
Senior Officer: My colleague claims that you do not have a driving license.
(The woman digs into her handbag, pulls out a clutch purse and hands it to the officer. The officer examines the license quizzically.)

Thank you ma'am, but I am puzzled, as I was told by my officer here that you didn't have a license, that you stole this car, and that you murdered and hacked up the owner! 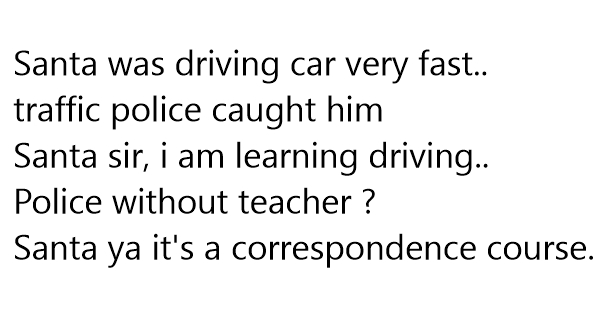 Santa was driving car very fast..
traffic police caught him
Santa sir, i am learning driving..
Police without teacher ?
Santa ya it's a correspondence course. 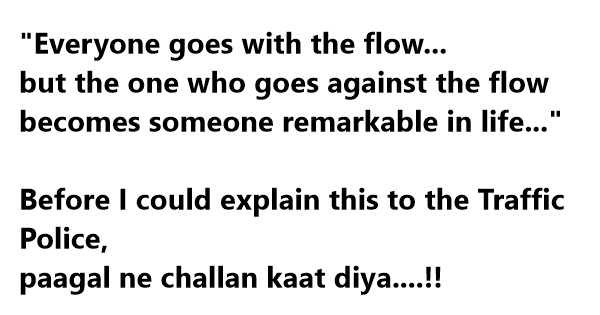 "Everyone goes with the flow...but the one who goes against the flow becomes someone remarkable in life..."

Before I could explain this to the Traffic Police,
paagal ne challan kaat diya....!!

Me: "Indian Sir, I'm Indian.. I Have Passport, Leave Me Sir" 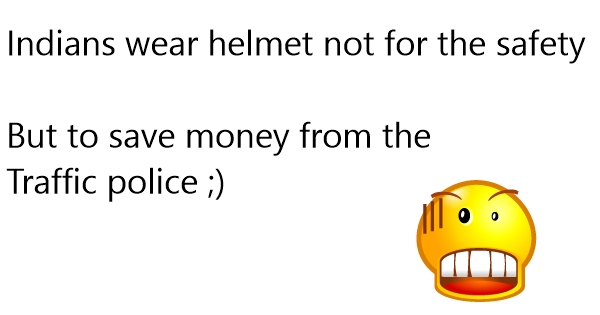 Indians wear helmet not for the safety

But to save money from the Traffic police ;)