February 18, 2016
"Mr. Clark, I have reviewed this case very carefully," the divorce court judge said, "And I've decided to give your wife $775 a week." "That's very fair, your honor." the husband said "And every now and then I'll try to send her a few bucks myself!". 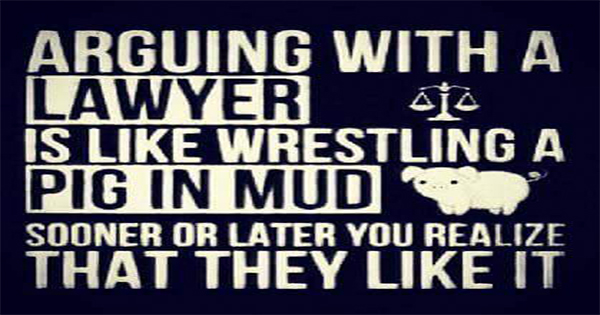 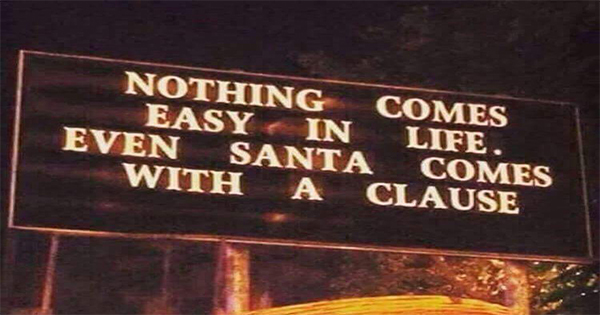 Three months pass by and the couple hear nothing. They bump into St. Peter and ask him about the marriage.

Two years pass by and no marriage.

St. Peter again assures them that he's working on it.

Finally after twenty long years, St. Peter comes running with a priest and tells the couple it's time for their wedding.

The couple marry and live happily for a while. But after a few months the couple go and find St. Peter and tell him things are not working out, and that they want to get a divorce.

"Can you arrange it for us?" they ask. 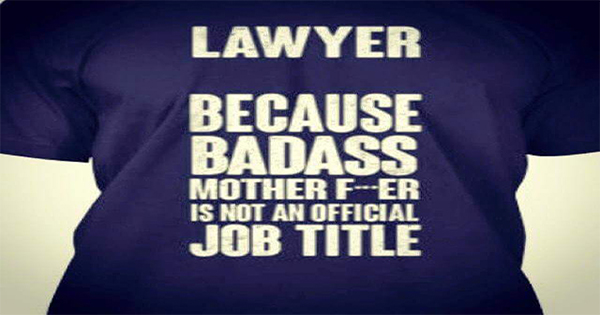 As the lawyer climbed over the fence, an elderly farmer drove up on his tractor and asked the lawyer what he was doing.

The lawyer responded, "I shot a duck and it fell into this field, and now I'm going to retrieve it."

The old farmer replied. "This is my property, and your not coming over here."

The indignant lawyer replied. "I'm one of the best trial lawyers in the UK, and if you don't let me get that duck, I'll sue you and take everything that you own.

The old farmer smiled and said, "Apparently, you don't know how we do things in Scotland. We settle small disagreements like this, with the Scottish Three Kick Rule."

The lawyer asked, "What is the Scottish Three Kick Rule?"

The farmer replied, "Well, first I kick you three times and then you kick me three times, and so on, back and forth until someone gives up."

The attorney quickly thought about the proposed contest and decided that he could easily take the old codger. He agreed to abide by the local custom.

The old farmer slowly gets down from the tractor and walked up to the city fella. His first kick planted the toe of his heavy work boot into the lawyer's groin, which dropped him to his knees.

His second kick nearly ripped the nose off his face.

The lawyer was flat on his belly, when the farmer's third kick to a kidney nearly causing him to give up, but didn't.

The lawyer summoned every bit of his will and managed to get to his feet and said, "Okay, you old tosser, now it's my turn."

The old farmer smiled and said,

A guy walks into a post office one day to see a middle-aged, balding man standing at the counter methodically placing "Love" stamps on bright pink envelopes with hearts all over them. He then takes out a perfume bottle and starts spraying scent all over them.

A lawyer defending a man accused of burglary tried this creative defense: "My client merely inserted his arm into the window and removed a few trifling articles. His arm is not himself, and I fail to see how you can punish the whole individual for an offence committed by his limb."

A lawyer trying to get tickets to a Broadway show, finally settled for a couple of seats a year in advance. When the exciting night arrived and he sat down in his seat, a woman in front of the lawyer noticed the empty seat next to him and asked why such a valuable commodity was unused.

A local United Way office realized that the organization had never received a donation from the town's most successful lawyer. The person in charge of contributions called him to persuade him to contribute.

"Our research shows that out of a yearly income of at least $700,000, you give not a penny to charity. Wouldn't you like to give back to the community in some way?"

The lawyer mulled this over for a moment and replied, "First, did your research also show that my mother is dying after a long illness, and has medical bills that are several times her annual income?"

The lawyer interrupts, "or that my brother, a disabled veteran, is blind and confined to a wheelchair?"

The stricken United Way rep began to stammer out an apology, but was interrupted again.

"or that my sister's husband died in a traffic accident," the lawyer's voice rising in indignation, "leaving her penniless with three children?!"

The humiliated United Way rep, completely beaten, said simply, "I had no idea..."

A man died and was taken to his place of eternal torment by the devil.

As he passed raging fire pits and shrieking sinners, he saw a man he recognized as a lawyer snuggling up to a beautiful woman.

'That's unfair!' he cried. 'I have to roast for all eternity, and that lawyer gets to spend it with a beautiful woman.'

'Shut up,' barked the devil, jabbing the man with his pitchfork.