A husband and wife are getting all snugly in bed. The passion is heating up as it sometimes does.

But then the wife suddenly stops and says "I don’t feel like it, I just want you to hold me." "WHAT!?" says her husband. The wife explains that he must be in tune with her emotional needs as a Woman. He realizes that nothing is going to happen tonight and he might as well deal with it...


The next day the husband takes her shopping at a big department store. He walks around and has her try on three very expensive outfits. She can’t decide. He tells his wife to take all three of them. They head to the shoe department and pick up matching shoes worth $200 each.

The pair go to the jewellery department where she finds a set of diamond earrings that her husband agrees to buy for her. The wife is so excited. She thinks her husband has flipped out - but she doesn’t care. She goes for the matching tennis bracelet. The husband says "You don’t even play tennis, but if you like it then let’s get it."

The wife is jumping up and down so excited she cannot even believe what is going on. She says to her husband, "I’m ready to go, let’s go to the cashier."

The husband stops and says, "No, honey I don’t feel like buying all this stuff now." The wife’s face goes blank. "Honey - I just want you to HOLD this stuff for a while."

The look on her face is indescribable and she is about to explode as her husband says, "You must be in tune with my financial needs as a Man." 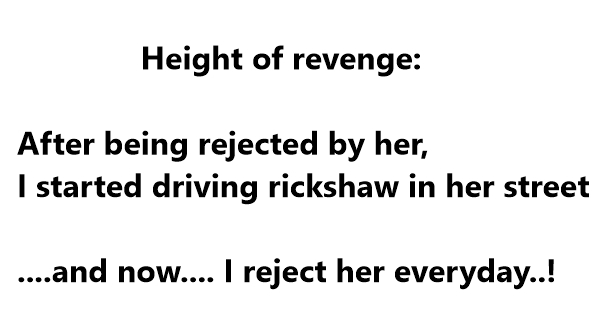 After being rejected by her, I started driving rickshaw in her street and now.... I reject her everyday..!

The best revenge Shahid Kapoor can take from Kareena kapoor is

by marrying saif's daughter who is 23 now !

There are two statues in a park; One of a nude man and one of a nude woman. They had been facing each other across a pathway for a hundred years, when one day an angel comes down from the sky and, with a single gesture, brings the two to life!!!!!!!!

The angel tells them, "As a reward for being so patient through a hundred blazing summers and dismal winters, you have been given life for thirty minutes to do what you've wished to do the most."

He looks at her, she looks at him, and they go running behind the shrubbery.

The angel waits patiently as the bushes rustle and giggling ensues. After fifteen minutes, the two return, out of breath and laughing.

The angel tells them, "Um, you have fifteen minutes left, would you care to do it again?"

She eagerly replies, "Oh, yes! But let's change positions. This time, I'll hold the pigeon down and you shit on its head." 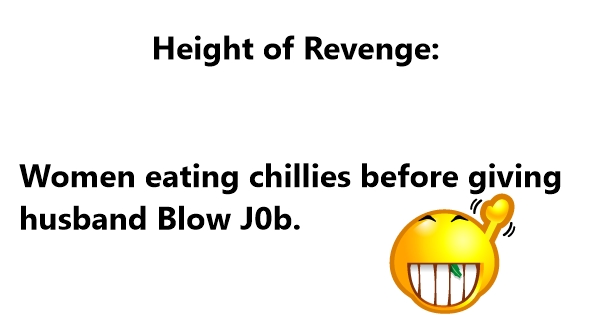 Revenge Is Sweet
There once was an old couple who had been married for thirty years.

Every morning the old boy would wake up and give off an enormous fart, much to his long suffering wife's annoyance.

"You'll fart your guts out one of these days," she always complained.

After a particularly bad week the wife decided to have her revenge and got up early, placing some turkey giblets in the bed next to the old boy's arse.

While making breakfast downstairs she heard his usual morning fart reverberate through the floorboards followed by a scream.

"You was right all along Missus," the old man says, "I finally did fart my guts out, but by the grace of God, and these two fingers, I managed to push 'em back in!"

When Swami Vivekanand was studying law at the University College of London, there was a professor, whose last name was Peters, who felt animosity for vivekanand, and because vivekanand never lowered his head towards him, their "arguments" were very common.

One day, Mr. Peters was having lunch at the dining room of the University and vivekanand came along with his tray and sat next to the professor.

The professor, in his arrogance, said, "Mr vivekanand: you do not understand... a pig and a bird do not sit together to eat ", to which vivekanand replies, "You do not worry professor, I'll fly away ", and he went and sat at another table.

Mr. Peters, green of rage, decides to take revenge on the next test, but vivekanand responds brilliantly to all questions.

Then, Mr. Peters asked him the following question, "Mr vivekanand, if you are walking down the street and find a package, and within it there is a bag of wisdom and another bag with a lot of money; which one will you take?"

Without hesitating, vivekanand responded, "the one with the money, of course".

Mr. Peters, smiling, said, "I, in your place, would have taken the wisdom,
don't you think?"

"Each one take what one doesn't have", responded vivekanand indifferently.