Funny Jokes About Newton With Hilarious Laws,Pictures,Quotes And Lot More :)

May 04, 2016
Physics would have been much easier if 'Tree' instead of 'Apple' had fallen on Newton's head. 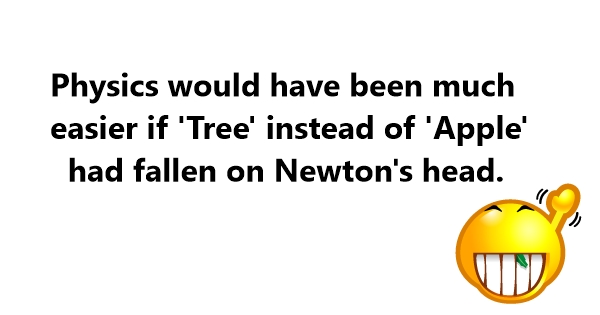 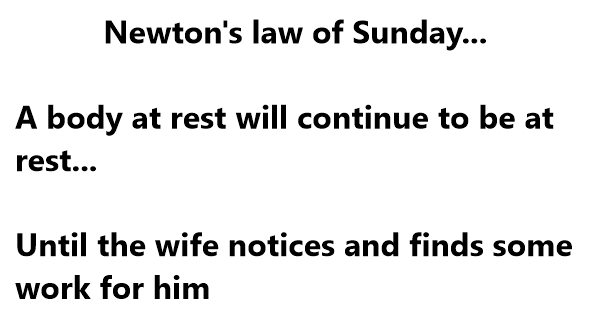 Universal Law Of Love :
Love Can Neither Be Created Nor Be Destroyed; Only It Can Transfer From One Girlfriend To Another Girlfriend With Some Loss Of Money.

2nd Law Of Love :
The Rate Of Change Of Intensity Of Love Of A Girl Towards A Boy Is Directly Proportional To The Instantaneous Bank Balance Of The
Boy And The Direction Of This Love Is Same To As Increment Or Decrement Of The Bank Balance.

Physics Teacher: “Isaac Newton was sitting under a tree when an apple fell on his head and he discovered gravity. Isn’t that wonderful?”

Student: “Yes sir, if he had been sitting in class looking at books like us, he wouldn’t have discovered anything.”

Woman: “I can make the boss give me the day off.”
Man: “And how would you do that?”
Woman: “Just wait and see.” She then hangs upside-down from the ceiling.

Boss comes in: “What are you doing?”
Woman: “I’m a light bulb.”
Boss: “You’ve been working so much that you’ve gone crazy. I think you need to take the day off.”

The man starts to follow her and the boss says: “Where are you going?”
The man says: “I’m going home, too. I can’t work in the dark.”


A man talking to God:


A little girl came home from school and said to her mother, “Mommy, today in school I was punished for something that I didn’t do.”

The mother exclaimed, “But that’s terrible! I’m going to have a talk with your teacher about this … by the way, what was it that you didn’t do?”

The little girl replied, “My homework.”


The students were lined up in the cafeteria for lunch. At the head of the table was a large pile of apples. The nun made a note, and posted on the apple tray: “Take only ONE. God is watching.”

Moving further along the lunch line, at the other end of the table was a large pile of chocolate chip cookies. A child had written a note, “Take all you want. God is watching the apples.”


Teacher: “Why are you late, Joseph?”
Joseph: “Because of a sign down the road.”
Teacher: “What does a sign have to do with you being late?”
Joseph: “The sign said, ‘School Ahead, Go Slow!’”


The teacher of the earth science class was lecturing on map reading.

After explaining about latitude, longitude, degrees and minutes the teacher asked, “Suppose I asked you to meet me for lunch at 23 degrees, 4 minutes north latitude and 45 degrees, 15 minutes east longitude…?”

After a confused silence, a voice volunteered, “I guess you’d be eating alone.”

Teacher asked George: “How can you prove the earth is round?”
George replied: “I can’t. Besides, I never said it was.”

Teacher: “Here is a math problem. If your dad earned $300 dollars a week and he gave your mother half, what should he have?”
Student: “A heart attack.”

Teacher: “This essay on your dog is, word for word, the same as your brother’s.”
Student: Yes, sir, it is the same dog.”

Sylvia: “Dad, can you write in the dark?”
Dad: “I think so. What do you want me to write?”
Sylvia: “Your name on this report card.”

Mother: “Why did you get such a low mark on that test?”
Junior: “Because of absence.”
Mother: “You mean you were absent on the day of the test?”
Junior: “No, but the kid who sits next to me was.”

Teacher: “John, why are you doing your math multiplication on the floor?”
John: “You told me to do it without using tables.”

Teacher: “Winnie, name one important thing we have today that we didn’t have ten years ago.”
Winnie: “Me.”

Teacher: “George Washington not only chopped down his father’s cherry tree, but also admitted it. Now, Louie, do you know why his father didn’t punish him?”

Einstein, Newton and Pascal are playing a rousing game of hide and seek. Einstein begins to count to ten. Pascal runs and hides. Newton draws a one meter by one meter square in the ground in front of Einstein then stands in the middle of it.

Why did Newton committed suicide?

We all know Sir Isaac Newton, the man behind the laws of Physics and truly a scientist extraordinaire!! But you know what the universal laws of Physics were proven wrong and Newton was greatly disappointed.

Here’s the reason why Newton committed suicide…..
Once, Newton had come to India and he had watched a few Tamil movies that had his head spinning. Here is how he was convinced that all his logic and laws in physics were just a huge pile of junk.

In the movie of Rajnikant, Newton was confused to such an extent that he went paranoid. Here are a few scenes:
1) Rajnikant has a Brain Tumor which, according to the doctors can’t be cured and his death is imminent. In one of the fights, our great Rajnikant is shot in the head. To everybody’s surprise, the bullet passes through his ears taking away the tumor along with it and he is cured! Long Live Rajnikant!

This was too much for our Newton to take! He was completely shaken and decided to go back. But he happened to see another movie for one last time, and thought that at least one movie would follow his theory of physics!! The whole movie goes fine and Newton is happy that all in the world hasn’t changed. Oops, not so fast!

The ‘climax’ finally arrives.
Rajnikant gets to know that the villain is on the other side of a very high wall. So high that Rajnikant can’t jump even if he tries like one of those superman techniques that our heroes normally use. Rajnikant has to desperately kill the villain because it’s the climax.

(Newton dada is smiling since it is virtually impossible?)
Rajnikant suddenly pulls two guns from his pockets. He throws one gun in the air and when the gun has reached above the height of the wall, he uses the second gun and shoots at the trigger of the first gun in air. The first gun fires off and the villain is dead.

Some Rules that NEWTON forgot to mention:

Law of the Telephone: When you dial a wrong number, you never get an engaged tone.

Law of Mechanical Repair: After your hands become coated with grease, your nose will begin to itch.

Law of the Workshop: Any tool, when dropped, will roll to the
least accessible corner.

Law of the Alibi: If you tell the boss you were late for work because you had a flat tire, the next morning you will have a flat tire.

Bath THEOREM: When the body is immersed in water, the telephone rings.

LAW OF ENCOUNTERS: The probability of meeting someone you know increases when you are with someone you don't want to be seen with.

LAW of the RESULT: When you try to prove to someone that a machine won't work, it will!

LAW OF BIO MECHANICS: The severity of the itch is inversely proportional to the reach.

Continues To Stay In Love With Each Other..

A cow was walking Newton stopped it.
It stopped. He found his 1st law
"An object continues to move unless it's stopped"