Funny Jokes About Aliens + One Liners,Pictures,Quotes

There was a husband and a wife that loved to have sex. They had it everywhere and tried everything.One day they both decided that it was getting old, the same thing over and over again and they wanted to try something new.Later that night a space ship landed outside their window and two aliens came out.

They were husband and wife and were also getting sick of the same thing over and over again too. So the male alien asks the female human if she would have sex with him and she agrees.

But the female human sees it and says wtf your c**k is too small,Then the male alien replies,Pull on my ear to make it the size you want. The female human keeps pulling his ear until his c**k is a massive size.

The next morning the aliens leave and the male human says, How did you like last night ? and his wife answers,it was brilliant the best ive ever had , And you she replies how was your night ? he replies it was the worse night ever all the female alien did to me all night was keep pulling my ear

Q: What did the alien say to the gardener?
A: Take me to your weeder.

An alien lands on Earth. He exits his UFO, on his much more compact hover car. He soon runs over an old lady, runs into her house and turns on the television.

The first show that plays is a crime show: "Did you do it?" "Yes, I did." The alien changes the channel, it is a cooking show: "Forks and knives, forks and knives." Switching the channel again, he find a wrestling match: "Bring it on fat boy." Changing it one last time, he sees a Glade plug-in commercial: "Plug it in, plug it in."

Two aliens landed in the West Texas desert near an abandoned gas station. They approached one of the gas pumps, and one of the aliens addressed it, "Greetings, Earthling.

We come in peace. Take us to your leader." The gas pump, of course, didn't respond. The alien repeated the greeting. There was no response. The alien, annoyed by what he perceived to be the gas pump's haughty attitude, drew his ray gun, and said impatiently, "Greetings, Earthling.

We come in peace. How dare you ignore us in this way! Take us to your leader, or I'll fire!" The other alien shouted to his comrade "No, you don't want to make him mad!" But before he finished his warning, the first alien fired.

There was a huge explosion that blew both of them 200 meters into the desert, where t hey landed in a heap. When they finally regained consciousness, the one who fired turned to the other one and said, "What a ferocious creature. It damn near killed us!

An alien from the planet Zarg walks into a small country pub."I'll have a pint please," he says with a smile.The barman says, "We don't serve aliens in here.""If you serve me," replies the alien, "I'll buy everyone in here a pint."

"Sorry mate, can't do it. It's against the brewery's policy," replies the barman."What about if you invite the whole town for drinks, make it a free bar, and I foot the bill at the end of the night?"The pound signs light up in the barmans eyes:

"Ok, you're on."By the end of the night, everyone, including the alien, is pissed. The barman says,"That'll be seven grand please mate!"The alien pulls his wallet out and says, "Have you got change for a Zonk?" 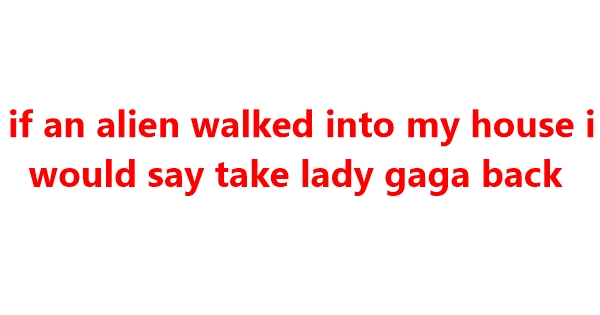 Q. How do you put a baby Alien to sleep
A. You Rocket

Women aliens are kidnapping men with big c0cks this Christmas but obviously your not in danger, I'm just texting you because this space ship is f#cking awesome!