A man's Iphone 6s fell down the toilet... He was devasted and started crying...

Seeing his dismal state the toilet goddess came out with a golden Iphone. .

WORK VS PRISON
Just in case you ever get these two environments mixed up, this should make things a little bit clearer.

IN PRISON.........all expenses are paid by the taxpayers with no work required.
AT WORK............you get to pay all your expenses to go to work, and they deduct taxes from your salary to pay for prisoners.

5 sindhi
and
5 sardar are travelling by rail from Pune to Mumbai.
They gather at Pune Railway Station.

Both groups desperately try to prove their superiority.

sindhi are desperately waiting for TC to come.....

When TC arrives,
all 5 sardar get into one toilet,
so when TC knocks,
one hand comes out with the ticket and the TC goes away.

On the return journey,
they don't get a direct train to Pune,
so both group decide to take a passenger train till Lonavala,
from there they can easily get a Local Train to Pune.

All sindhi
IN ONE TOILET.
ALL Sardar IN THE OPPOSITE TOILET.

One sardar gets out and knocks the door of sindhi toilet.
One sindhi hand comes out with the tickets,
Sardar takes the ticket and enters sardar toilet.

TC drives out all the sindhi from the toilet,
And they are heavily fined.

This time,
sindhi decide that they will play the same (1 ticket) trick.

TC Comes.
All sardar show their tickets,
AND ......
sindhi are still searching for toilet in the Local train!!!!!

TYPES OF KAKA: Please Read You Will Be Ripped
 1)GHOST KAKA
The kind of kaka when u felt there’s kaka coming out, but no kaka
in a toilet
2) CLEAN KAKA
U kaka it out, see a kaka in the toilet but nothing on the tissue
3) WET KAKA
After wiping plenty times you still feel un wiped
4) SECOND WAVE KAKA
U’re done kakking, u’ve pulled up your pants and realize u need to
kaka some more
5) POP A VEIN IN YOUR FOREHEAD KAKA
U strain so much to get it out you feel like you’re having a stroke
6) GASSY KAKA
So noisy, every1 within earshot is giggling
7) DRINKERS KAKA
It leaves the most noticeable skid marks at the bottom of the toilet
8) THE I WISH I COULD KAKA
U wanna kaka but all u do is sit on the toilet and fart a few times
9) WET CHEEK KAKA
It drops so fast it splashes water on your butt cheeks
10) THE DANGLING KAKA
The one that refuses to leave your ass u need to shake it off
11) THE SURPRISE KAKA
You’re about to fart but BAAAMMMM! IT’S A KAKA!!!
Lol, no matter how beautiful or rich you are but im sure you’ve
experienced one or more of those kaka type.

A certain private school was faced with a unique problem, where a number of 12-year-old girls were beginning to use lipstick. They wud apply it in the bathroom, which was fine. But after that they would press their lips on the mirror leaving dozens of little lip prints.

Finally the principal decided that something had to be done.

She called all girls to the bathroom and met them there with the maintenance janitor. She explained that all these lip prints were causing a major problem for the custodian who had to clean the mirrors every night (you can just imagine all the yawns from the little princesses).

He took out a long-handled mop, dipped it in the toilet, and cleaned the mirror with it.

Since then, there have been no lip prints on the mirror.

3.Racism Will never end as long we still wash first white clothes, then other colors later

4.Racism will never end if people still use BLACK to symbolise bad luck and WHITE for peace!

5.Racism will never end if people still wear white clothes to weddings and black clothes to the funerals

6.Racism will never end as long as those who don't pay their bills are Blacklisted not Whitelisted. Even when playing the pool (snooker), you haven't won until you sink the black ball, and the white ball must remain on the field.

A little boy blows up a balloon and starts flicking it all around the house with his finger.?His mother tells him to stop it as he's liable to break something, but the boy continues. 'Johnny!' Mom screams. 'Knock it off.' You're going to break something. Hestops and eventually Mom leaves for a short trip to the shopping center.

Johnny starts up with the balloon again after his mom has left for the store. He gives it one last flick and it lands in the toilet where he leaves it. Mom comes in and while putting away the grocery gets the urge. A diarrhea run. She can hardly make it to the toilet in time and SPLASH, out it comes. When she's finished, she looks down and can't believe what she's seeing.

She's not sure what this big brown thing is in the toilet! She calls her doctor. The doctor is baffled as she describes the situation, but he assures her he'll be over shortly to examine everything. When he arrives she leads him to the bathroom and he gets down on his knees and takes a long, hard look at the thing.

A husband and wife were in the bathroom getting ready for work when the husband looked
at his wife and said, "I gotta have you!"


He backed her up against the bathroom door, pulled down her panties and ravaged her. He
knew he was doing great because she screamed and wiggled more than she ever had before.

When he finished, he started putting his clothes back on and when he noticed his wife still
writhing against the door he said, "That was the best, honey. 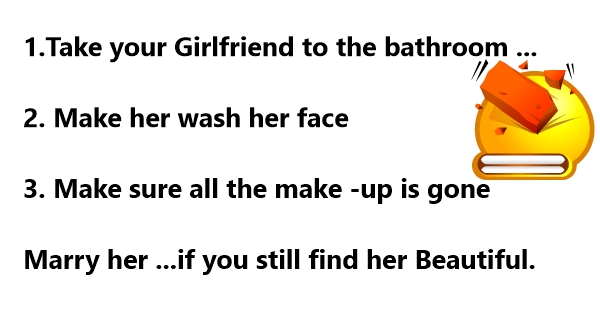