March 11, 2016
"Needing insurance is like needing a parachute. If it isn't there the first time, chances are you won't be needing it again." 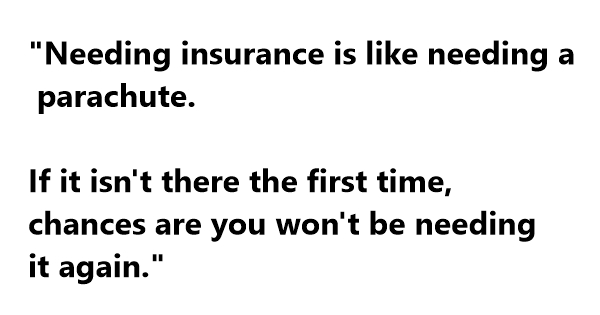 The adjuster replied, "Whoa there, just a minute, Susan. Insurance doesn't quite work like that. We will ascertain the value of what was insured and provide you with a new one of comparable worth".

A lawyer and an engineer were fishing in the Caribbean. The lawyer said, "I'm here because my house burned down, and all I owned was destroyed by the fire. The insurance company paid
for everything and I'm using some of the insurance money for this trip."

"That's quite a coincidence," said the engineer. "I'm here because my house and all my belongings were destroyed by a flood, and my insurance company also paid for everything."

A woman was in the hospital after feeling very ill.
The doctor says to her, “I have some bad news for you.

You only have three months to live.”
“Oh that’s terrible,” the woman sighs, “what am I going do?”

The doctor replies, “Marry an insurance agent.”
“Will I live longer?” asks the woman.

A man walks into an insurance office and asks for a job.
"We don't need any one," they replied.
"You can't afford not to hire me. I can sell anyone anytime any thing."
"We have two prospects that no one has been able to sell. If you can sell just one, you have a job."
He was gone for about two hours and returned and handed them two checks, one for a $80,000 policy and another for a $50,000 policy.

"How in the world did you do that," they asked.
"I told you I'm the world's best salesman, I can sell anyone anywhere anytime."
"Did you get a urine sample?" they asked him.
"What's that?" he asked.
"Well, if you sell a policy over $40,000 the company requires a urine sample. Take these two bottles and go back and get urine samples."

He was gone for about eight hours and then he walks in with two five gallon buckets, one in each hand.

He sets the buckets down and reaches in his shirt pocket and produces two bottles of urine and sets them on the desk and says, "Here's Mr. Brown's and this one is Mr. Smith's."
"That's good," they said, "but what's in those two buckets?"