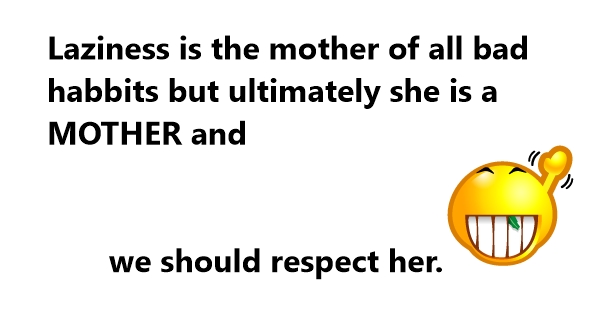 5.Fashion?
Lungi with a zip.

Its a talent of taking rest before you get tired because prevention is better than cure. :D

chacha nehru : Laziness is the worst enemy
but
Gandhi Ji : Love Your Enemy

Laziness rocks:
Boy:mom, pls giv me a glass of water,

A Funny Act Of Laziness Shared On Quora-

Geological mapping involves walking around to every nook and cranny in your area, collecting samples, identifying them, putting them in a spatial and temporal context using GPS and detailed sketches drawn on-site. It's a pretty arduous process.

On the last day of a 10-day mapping trips, both me and my partner got up fairly tired. We still had one steep hill left to map out, a couple hundred m². Couldn't be bothered, so we just concocted a makeshift telephoto lens,

went to a grassy knoll with a clear view of the hillface, and took a high-res picture of it. Then we had an 8-hour picnic in the clear sunshine and cool 25°C weather, with sandwiches I stole from the youth hostel breakfast and three bottles of white wine she bought,

listening to the birds singing and laughing at the suckers who are actually working. The mapping was done over dinner at the hostel, using the plants as proxies for the geology underneath.