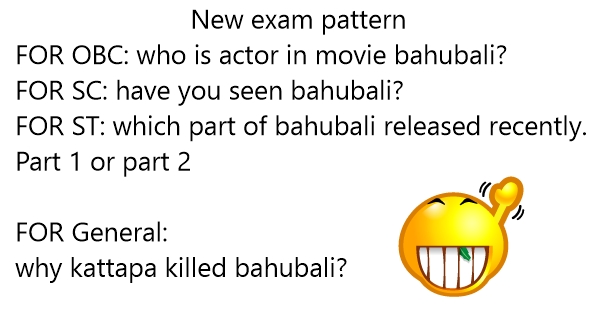 Question Paper Pattern in Future:
General: Answer all the questions

ST: Thanks for coming.

" I think we should have job reservations in all the fields. I completely support the PM and all the politicians for promoting this. Let's start the reservation with our cricket team. We should have 10 percent reservation for Muslims. 30 percent for OBC , SC /ST like that. Cricket rules should be modified accordingly.


We should influence ICC and make rules so that the pace bowlers like Shoaib Akhtar should not bowl fast balls to our OBC player.

Bowlers should bowl maximum speed of 80 km/ hour to an OBC player.
Any delivery above this speed should be made illegal.

Also we should have reservation in Olympics. In the 100 meters race, an OBC player should be given a gold medal if he runs 80 meters.

There can be reservation in Government jobs also. Let's recruit SC/ST and OBC pilots for aircrafts which are carrying the ministers and politicians (that can really help the country...)

Ensure that only SC/ST and OBC doctors do the operations for the ministers and other politicians. (Another way of saving the country...)

Let's show the world that INDIA is a GREAT country.

Probably the best joke on reservation:--
‪New exam pattern
FOR OBC: who is actor in movie bahubali?

FOR SC: have you seen bahubali?

FOR ST: which part of bahubali released recently. Part 1 or part 2

FOR General:
why kattapa killed bahubali?

I am a PUNJABI... We need reservation too

* We must have the right to daaru & Party till late night....

Ant and Grasshopper - Indian Version of story - too good and fact

The Ant works hard in the withering heat all summer building its house and
laying up supplies for the winter. The Grasshopper thinks the Ant's a fool and laughs dances plays the summer away.

Come winter, the shivering Grasshopper calls a press conference and demands
to know why the Ant should be allowed to be warm and well fed while others are cold and starving.

NDTV, BBC, CNN , Asianet show up to provide pictures of the shivering Grasshopper
next to a video of the Ant in his comfortable home with a table filled with food.

The World is stunned by the sharp contrast.

How can this be that this poor Grasshopper is allowed to suffer so?

Arundhati Roy stages a demonstration in front of the Ant's house.

Medha Patkar goes on a fast along with other Grasshoppers demanding that Grasshoppers be relocated to warmer climates during winter .

Mayawati states this as 'injustice' done on Minorities.

CPM in Kerala immediately passes a law preventing Ants from working hard in the heat so as to bring about equality of poverty among Ants and
Grasshoppers.

Railway minister allocates one free coach to Grasshoppers on all Indian Railway Trains, aptly named as the 'Grasshopper Rath'.

Finally, the Judicial Committee drafts the 'Prevention of Terrorism Against Grasshoppers Act'[POTAGA] , with effect from the beginning of the winter..

The Ant is fined for failing to comply with POTAGA and having nothing left to pay his retroactive taxes, it's home is confiscated by Government
and handed over to the Grasshopper in a ceremony covered by NDTV, BBC, CNN.

Arundhati Roy calls it 'A Triumph of Justice'.

The Ant has since migrated to the US and set up a multi-billion dollar company in Silicon Valley ,

100s of Grasshoppers still die of starvation despite reservation somewhere in India ,

As a result of losing lot of hard working Ants and feeding the grasshoppers, India is still a developing country...!!