The Funniest Joke Ever Told In The History Of The Universe

the funniest joke ever told in the history of the universe

1. A woman gets on a bus with her baby. The bus driver says: ''Ugh, that's the ugliest baby I've ever seen!'' The woman walks to the rear of the bus and sits down, fuming. She says to a man next to her: ''The driver just insulted me!'' The man says: ''You go up there and tell him off. Go on, I'll hold your monkey for you.''

4. A young blonde woman is distraught because she fears her husband is having an affair, so she goes to a gun shop and buys a handgun. The next day she comes home to find her husband in bed with a beautiful redhead. She grabs the gun and holds it to her own head. The husband jumps out of bed, begging and pleading with her not to shoot herself. Hysterically the blonde responds to the husband, ''Shut up...you're next!''

6. Police arrested two kids yesterday, one was drinking battery acid, the other was eating fireworks. They charged one - and let the other one off.

7. Two aerials meet on a roof - fall in love - get married. The ceremony was rubbish - but the reception was brilliant.

8. Another one was: Doc, I can't stop singing the 'Green Green Grass of Home.' He said: 'That sounds like Tom Jones syndrome.' 'Is it common?'I asked. 'It's not unusual' he replied. 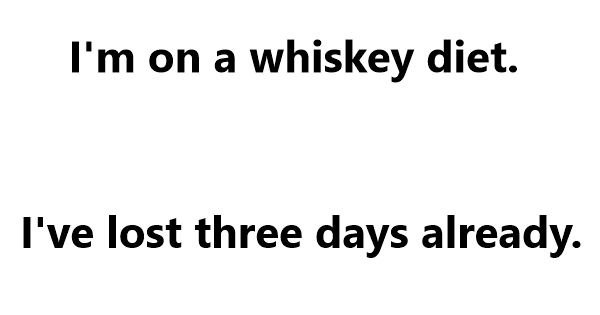 10. A man walks into a bar with a roll of tarmac under his arm and says: ''Pint please, and one for the road.''

11. I went to the doctors the other day, and I said, 'Have you got anything for wind?' So he gave me a kite.

12. My mother-in-law fell down a wishing well, I was amazed, I never knew they worked.

14. A woman has twins and gives them up for adoption. One of them goes to a family in Egypt and is named 'Amal.' The other goes to a family in Spain, they name him Juan'. Years later; Juan sends a picture of himself to his mum. Upon receiving the picture, she tells her husband that she wished she also had a picture of Amal. Her husband responds, ''But they are twins. If you've seen Juan, you've seen Amal.''

16. I went to buy some camouflage trousers the other day, but I couldn't find any.

17. When Susan's boyfriend proposed marriage to her she said: ''I love the simple things in life, but I don't want one of them for my husband''.

18. ''My therapist says I have a preoccupation with vengeance. We'll see about that.''

20. I met a Dutch girl with inflatable shoes last week, phoned her up to arrange a date, but unfortunately, she'd popped her clogs.

24. A sandwich walks into a bar. The barman says ''Sorry we don't serve food in here.''

26. I cleaned the attic with the wife the other day. Now I can't get the cobwebs out of her hair.

28. A group of chess enthusiasts checked into a hotel and were standing in the lobby discussing their recent tournament victories. After about an hour, the manager came out of the office and asked them to disperse. ''But why?'' they asked, as they moved off. ''because,'' he said ''I can't stand chess nuts boasting in an open foyer.''

30. I'm in a great mood tonight because the other day I entered a competition and I won a years supply of Marmite......... one jar.

31. So I went to the Chinese restaurant, and this duck came up to me with a red rose and says ''Your eyes sparkle like diamonds''. I said, ''Waiter, I asked for a-ROMATIC duck''.

33. I was having dinner with Garry Kasparov (world chess champion), and there was a check tablecloth. It took him two hours to pass me the salt.

34. There was a man who entered a local paper's pun contest.. He sent in ten different puns, in the hope that at least one of the puns would win. Unfortunately, no pun in ten did.

35. I went down the local supermarket, I said, ''I want to make a complaint, this vinegar's got lumps in it'', he said, "Those are pickled onions''.

36. I backed a horse last week at ten to one. It came in at quarter past four.

37. I swear, the other day I bought a packet of peanuts, and on the packet it said ''may contain nuts.'' Well, YES! That's what I bought the buggers for! You'd be annoyed if you opened it and a socket set fell out!''

38. A lorry-load of tortoises crashed into a trainload of terrapins, What a turtle disaster

41. Two Eskimos sitting in a kayak were chilly. But when they lit a fire in the craft, it sank, proving once and for all that you can't have your kayak and heat it.

42. I've got a friend who's fallen in love with two school bags, he's bisatchel.

44. A three-legged dog walks into a saloon in the Old West. He slides up to the bar and announces: ''I'm looking for the man who shot my paw.''

45. I tried water polo, but my horse drowned. 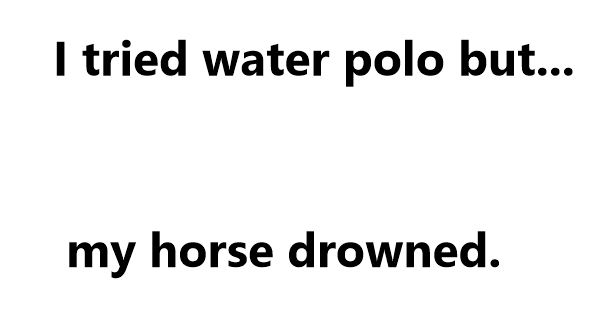 46. I'll tell you what I love doing more than anything: trying to pack myself in a small suitcase. I can hardly contain myself.

47. So I met this gangster who pulls up the back of people's pants, it was Wedgie Kray.

51. Boy messages his Girl "Honey, I can't live without you! When are you coming to me?
Girl -"Who is dying! I lost my saved numbers, kindly tell me your name?"

52.Wife: If I had married a Monster, I would have been felt much better than being with you...
Man: But marriages are not allowed in the same blood relation

53. The wife checked her husband's phone and found these names:

- The tender one
- the amazing one
- Lady of my dreams

She got angry and called the first number to find out that was his mother. Then she called the second number on which his sister replied. When she dialed the third number, her own phone rang !!!!

She cried until her eyes got swollen because she had doubted her innocent husband, so she gave him her whole months salary to make up for her sin.
Once his mother came to know of the story, she sold all her jewelry and gave him the money

Husband took the money and bought a gift for his girlfriend whose name was saved as "Electrician Jimmy."