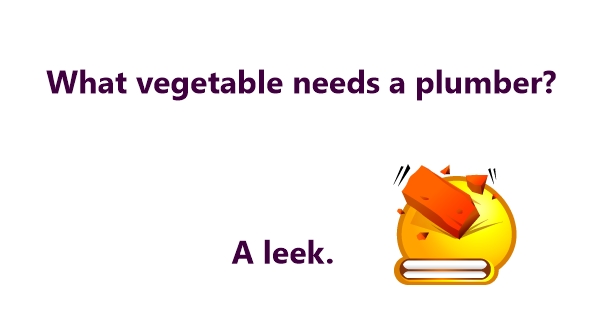 A lady was expecting the plumber. He was scheduled to come at 10 A.M. Ten o’clock came and went with no plumber. She concluded he wasn’t coming, and went out to do some errands.

While she was out, the plumber arrived. He knocked on the door; the lady’s parrot, who was at home in a cage by the door, said, “Who is it?”

He replied, “It’s the plumber.”

He thought it was the lady who’d said, “Who is it?” and waited for her to come and let him in.

When this didn’t happen he knocked again, and again the parrot said, “Who is it?”

He said, “It’s the plumber!” He waited, and again the lady didn’t come to let him in.

He knocked again, and again the parrot said, “Who is it?”

Again he waited and again she didn’t come. He knocked again and the parrot said, “Who is it?”

The plumber screamed, flew into a rage, pushed the door in, and ripped it off its hinges. He suffered a heart attack and fell dead in the doorway.

The lady came home from her errands, only to see the door ripped off its hinges and a corpse lying in the doorway. “A dead body!” she exclaimed. “Who is it?”

The parrot said, “It’s the plumber.” 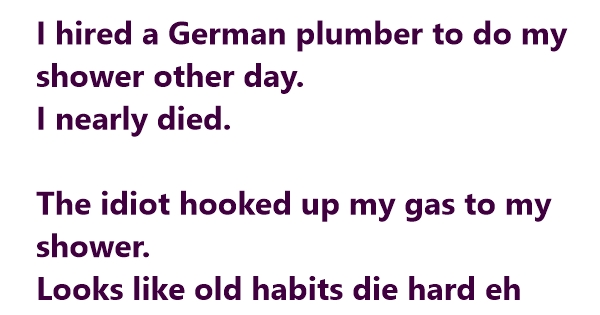 I hired a German plumber to do my shower other day. I nearly died. The idiot hooked up my gas to my shower.

On coming home from a late night at the office, the partner at a presigious law firm discovered that his basement was flooded. He summoned a plumber. The plumber arrived soon afterward, with a spare set of overalls and a cap that said "Blue Collar Guy".


The lawyer, still dressed in his an expensive suit, silk tie, and gleaming wingtips, chuckled. "I like your hat," he said. "But you're the first plumber I've met who brought a change of clothes to a job." The plumber smiled.

The plumber went down into the basement, and the lawyer heard him working downstairs. Before too long, the plumber came back upstairs. "I'm almost done down there. I'm going to write up your bill, then I'm going to go out to my truck for a tool I need to finish up."

The plumber added, "The overalls and hat you asked me about, they're not for me. I'm looking for a new assistant, and I was hoping you might know somebody who wanted the job." The lawyer responded, with more than a hint of condescension, "I'm a lawyer. Who would I know who would want to work as a plumber?" The plumber shrugged, and handed the lawyer his bill.