I think there is something wrong in water ! 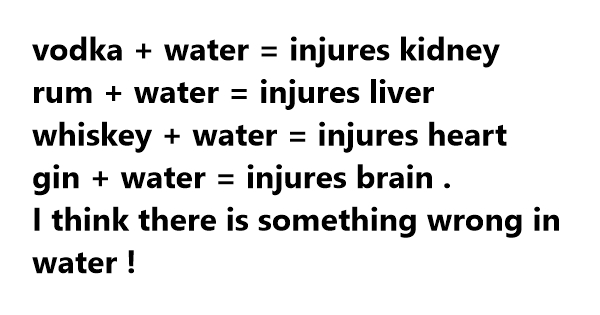 It was time for the final, and the student depended upon getting at least one answer right on the chemistry test.

This was a quick question for most, but it took the student some thinking time. 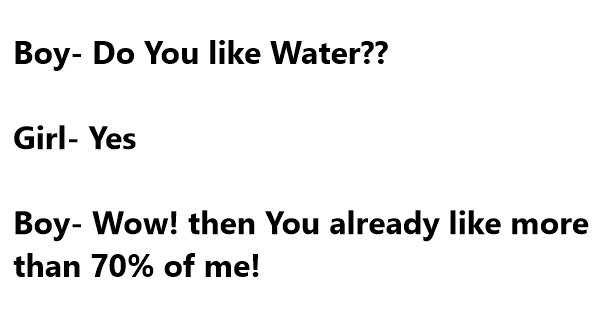 A woman goes to the Doctor, worried about her husband's temper.

The Doctor asks: "What's the problem?

The woman says: "Doctor, I don't know what to do. Every day my husband seems to lose his temper for no reason. It scares me."

The Doctor says: "I have a cure for that. When it seems that your husband is getting angry, just take a glass of water and start swishing it in your mouth. Just swish and swish but don't swallow it until he either leaves the room or calms down."

Two weeks later the woman comes back to the doctor looking fresh and reborn.

The woman says: "Doctor that was a brilliant idea! Every time my husband started losing it, I swished with water. I swished and swished, and he calmed right down! How does a glass of water do that?"

A Mr. Charly, a chemistry teacher, decided to instruct his 5th grade class a lesson about the evils of liquor, so he designed an experiment that involved a glass of water, a glass of whiskey, and two worms.

"Now, class, observe closely the worms," said the teacher first putting a worm into the water. The worm in the water writhed about, happy as a worm in water could be.

The second worm, he put into the whiskey. It writhed painfully, and it quickly sank to the bottom, dead as a doornail.

"Now, what lesson can we derive from this experiment?" the Mr. Charly asked. Little Terry raised his hand and wisely responded, "Drink whiskey and you won't get worms!"