Humorous Jokes About New Zealand/Kiwi Humor With Quotes & One Liners 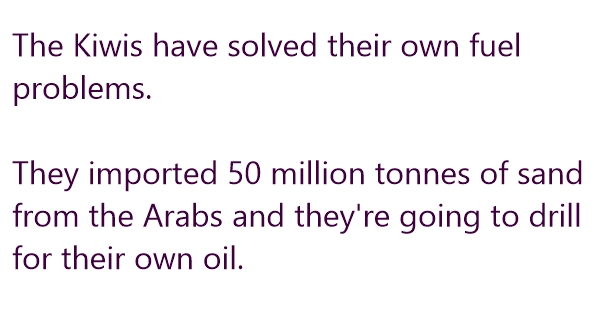 Q. How do you castrate a man from Te Kuiti?
A. Kick his sister in the chin.

Robert Muldoon, Prime Minister of New Zealand from 1975 till 1984. You can think of him as Churchill without a world war, warts and all (especially warts). There are a couple of good lines involving him.

First: someone expressed a certain amount of concern at the number of people emigrating from New Zealand to Australia. Muldoon dismissed such concerns, because “it raises the IQ of both countries.”

Second: it is told that, during the holidays, the Governor General encountered Muldoon coming out of Parliament with a big turkey under his arm, engendering the following exchange:

GG: I see you won the draw for the Christmas ham!

Muldoon: What do you mean? This is a turkey.

GG: I was talking to the turkey.

A Chinaman, a German and a Kiwi are working on a highrise construction site.At lunch time, they sat down together and opened their lunchboxes.

I vill jump off zee building too". The Kiwi looked inside and said, "Smokes if I get fush and chups again, I'm gonna jump off this building as well'!