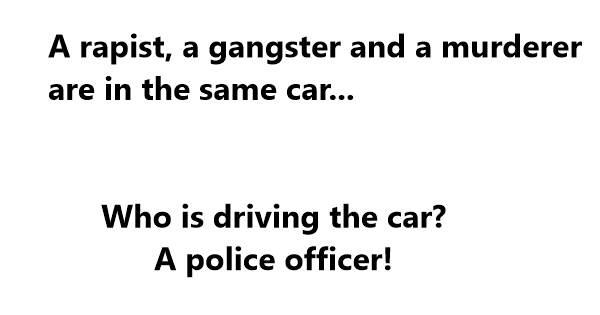 Im so gangster when i was conceived i bitch slapped my mother and said B!TCH WHERE IS MY MONEY 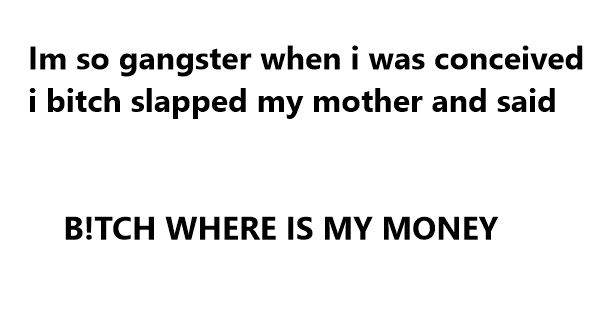 A rapist, a gangster and a murderer are in the same car...
Who is driving the car?
A police officer! 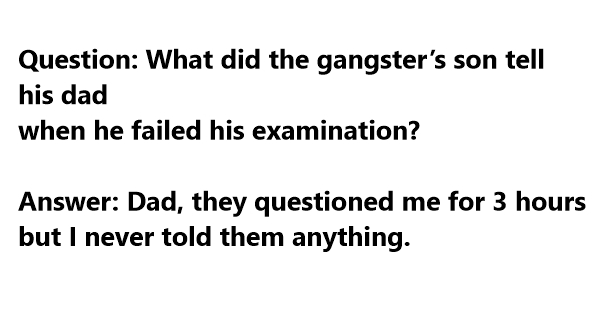 Question: What did the gangster’s son tell his dad
when he failed his examination?

Answer: Dad, they questioned me for 3 hours
.
.

but I never told them anything.

So I met this gangster who pulls up the back of people's pants, it was Wedgie Kray

*Most 'First Class' students get technical seats, some become Doctors and some Engineers.

* The 'Second Class' pass, and then pass MBA, become Administrators and control the 'First Class'.

* The 'Third Class' pass, enter politics and become Ministers and control both.

* Last, but not the least, The 'Failures' join the underworld and control all the above.

Epic Funny Conversation Between Dad & Son
Dad: if you Pass in the exam i will Present you 1 Cycle.

Dad: Then i will Present 10 Cycles

Dad: To Open a Cycle Shop..

Dad: Under water? What do You mean?

Son: They're below C level.

Dad: whenever i beat you, you don't get annoyed, how you control your anger?

Son: i start cleaning the toilet. Sitting with your toothbrush

Dad: If i go to America & Your mother go to Paris Where will you go?

Son: No, because Paris is beautiful than America

Dad: If i go to Paris & your Mom goes to America , so Where will you go?