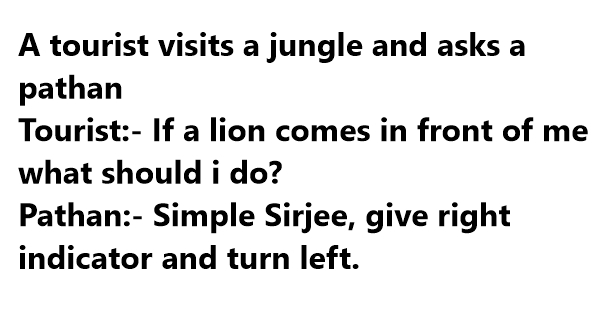 There was a Japanese man who went to America for sightseeing. On the last day, he hailed a cab and told the driver to drive to the airport. During the journey, a Honda drove past the taxi. Thereupon, the man leaned out of the window excitedly and yelled, "Honda, very fast! Made in Japan!"

After a while, a Toyota sped past the taxi. Again, the Japanese man leaned out of the window and yelled, "Toyota, very fast! Made in Japan!"

And then a Mitsubishi sped past the taxi. For the third time, the Japanese leaned out of the window and yelled, "Mitsubishi, very fast! Made in Japan!"

The driver was a little angry, but he kept quiet. And this went on for quite a number of cars. Finally, the taxi arrived at the airport. The fare was $300.

The Japanese exclaimed, "Wah... so expensive!"

There upon, the driver yelled back, "Meter, very fast! Made in Japan!"An American tourist visited a small town in Spain.

There upon, the driver yelled back, "Meter, very fast! Made in Japan!"


The residents had never seen an American before, so he was treated as an honoured guest at the hotel.

Dinning for the first night, he asked the waiter what he recommended for dinner.

He suggested the "cojones".

The tourist asked what they were and the waiter replied, "Those are the testicles of the bull killed in the ring today."

He was shocked but agreed to try them after being assured it was a delicacy reserved only for special guests.

The tourist found them to be very tasty.

The next night he again ordered them for dinner.

The waiter complied but somewhat reluctantly.

The tourist again found them to be very tasty but asked the waiter why they were so much smaller than before.

The waiter said, "You see, Senor, sometimes it is the bull that wins!"

A Tourist in Zanzibar had a friend as an interpreter by the name of Mr.Makeke. When in a small restaurant in town interpretation English to Kiswahili went like this:


Tourist: Do you have vegetables here.

Makeke: No sir, they don't have.

Tourist: OK, fine, do you have hot dogs.

Tourist: What type of snacks do you have here?

Makeke: They don't cook any type of snacks here, maybe you can go back and eat at home.

Makeke: Lets get out of here, I think this man is crazy!

It's best to learn the word for coffee (Kahawa) straightaway. There is a word that sounds just like cof-fee (Kofi), only in Kiswahili it means "SLAP" and that's the last thing you would want from your waiter first thing in the morning.

An Indian tourist walks into a curio shop in San Francisco.

Looking around at the exotica, he notices a very lifelike,

Life-sized bronze statue of a rat. It has no price tag,

But is so striking he decides he must have it.

He takes it to the owner: "How much for the bronze rat?"

"I'll just take the rat, you can keep the story." 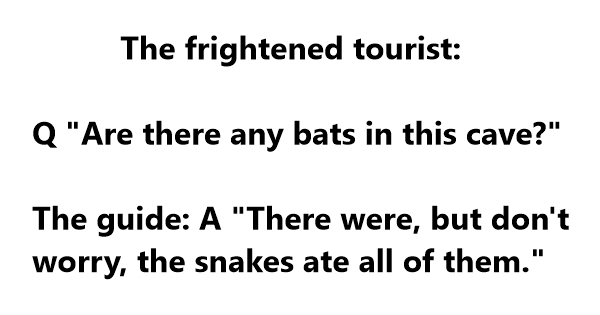 Q "Are there any bats in this cave?"

"A foreign tourist was swimming in an English lake. Taken by cramps, he began to sink. He called out for help:

“Attention! Attention! I will drown and no one shall save me!”

Many people were within earshot, but, being well-brought up Englishmen and women, they honored his wishes and permitted him to drown."

A tourist visits a jungle and asks a pathan
Tourist:- If a lion comes in front of me what should i do?
Pathan:- Simple Sirjee, give right indicator and turn left.