My postman's a right lazy twat!

He added me on Facebook, and posts all my letters to my wall. 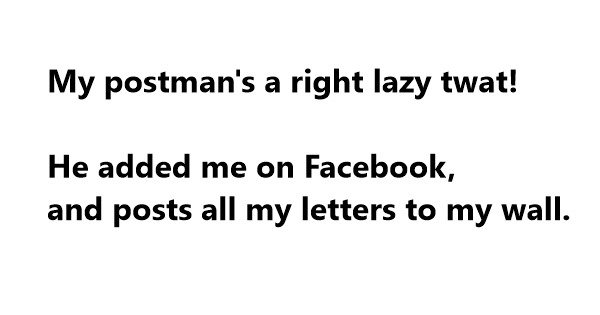 My postman told me he's going to travel to Spain, so I asked him if he'll visit Parcelona.

A postman was retiring after 35 years of service.
The town people presented him different gifts.

In one house a young lady took him to bedroom

gave him a good sex, a lavish lunch and one dollar.

Postman asked amazingly "why one dollar?

Actually I asked my husband what to present you, he said;

"[email protected] him! just give him one dollar." But the lunch was my idea.

It was Postman Pat's last day on the job after 35 years of carrying the mail through all kinds of weather to the same villages and towns.


When he arrived at the first house on his route, he was greeted by the whole family there, who all hugged and congratulated him and sent him on his way with a cheque for £50.

At the second house the family presented him an 18-carat gold watch.The folks at the third house handed him a bottle of 18-year old single malt Scotch whisky.

At the fourth house he was met at the door by a dumb blonde in her lingerie.She took him by the arm and led him up the stairs to the bedroom where she blew his mind with the most passionate love he had ever experienced.

When they went downstairs, the blonde fixed him a full English breakfast: Bacon, Eggs, Sausage & Tomato with freshly squeezed orange juice. As she was pouring him a cup of steaming coffee, he noticed a pound coin in the saucer.

'All this was just too wonderful for words,' he said, 'but what's the quid for?'

'Well,' said the dumb blonde, 'Last night, I told my husband that today would be your last day and that we should do something special for you.

One Monday morning Shane the postman was riding through the neighbourhood on his usual route, delivering the mail.

As he approached one of the homes he noticed that both cars were still in the driveway.

His wonder was cut short by David, the home owner, coming out with a load of empty beer, wine
and spirit bottles for the recycling bin.

'Wow David, looks like you guys had one hell of a party last night,' the Postman commented.

David, in obvious pain, replied, 'Actually we had it Saturday night. This is the first time I have felt
like moving since 4:00 o'clock Sunday morning .We had about 15 couples from around the
neighbourhood over for some weekend fun and it got a bit wild. We all got so drunk around
midnight that we started playing WHO AM I?'

The Postman thought for a moment and said, 'How do you play WHO AM I?'

Well, all the guys go in the bedroom and come out one at a time covered with a sheet
with only the 'family jewels' showing through a hole in the sheet. Then the women try to
guess who it is..'

The postman laughed and said, 'Sounds like fun, I'm sorry I missed it.'

'Probably a good thing you did,' David responded, 'Your name came up 7 times.'

A Kid Came Wid Cigrete In Mouth & Beer In Hand...

The postman knocked on my door when I was in the bath, so I rushed down the stairs and opened the door.

"You should really put some clothes on."

"I know, but this job gets really boring," he replied.

Three women were sitting around throwing back a few drinks and talking about their sex lives.

Karen said, “I call my husband the dentist because nobody can drill like he does.”

Joanne giggled and confessed, “I call my husband the miner, because of his incredible shaft.”

Kathy quietly sipped her whiskey until Joanne finally asked, “Well, what do you call your boyfriend?”

Kathy frowned and said, “The postman.”

I've quit my new job as a postman.