May 11, 2016
A family had twin boys whose only resemblance to each other was their looks. If one felt it was too hot, the other thought it was too cold. If one said the TV was too loud, the other claimed the volume needed to be turned up. Opposite in every way, one was an eternal optimist, the other a doom and gloom pessimist.

"Why are you crying?" the father asked.
"Because my friends will be jealous, I'll have to read all these instructions before I can do anything with this stuff, I'll constantly need batteries, and my toys will eventually get broken." answered the pessimist twin.

Passing the optimist twin's room, the father found him dancing for joy in the pile of manure. "What are you so happy about?" he asked.
To which his optimist twin replied, "There's got to be a pony in here somewhere!"

"Now son, we want to be proud of you, you're growing up and
it's about time you slept all night in your own bed...will you do that
for us?"

"Both Mummy Ballon and I want to be proud of you...so please stay
in your own bed until morning"

When they all wake up in the morning...Daddy Balloon sees
Baby Balloon and becomes rather angry...he says...

"Look Baby Balloon...I asked you to stay in your OWN bed all night
so we could be proud of you and here you are back in OUR bed!!"

....You've let your MOTHER down 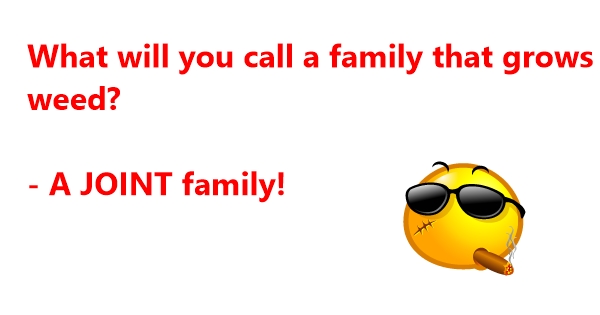 What will you call a family that grows weed?

Two men met at a bus stop and struck up a conversation. One of them kept complaining about family problems. Finally the other man said, "You think you have family problems? Listen to my situation... A few years ago I met a young widow with a grown up daughter and we got married.

That made me the grandfather of my half brother. This was nothing until my wife and I had a son. Now the half sister of my son, my stepmother is also the grandmother. This makes my father the brother in law of my child, whose stepsister is my fathers wife,