GST ! Yeah ... So hot topic now a days. Whole India is having a talk about it.Some are worried, Some are excited.But my duty is to make you people laugh , So I'm here to share some of the funniest GST jokes,GST funny quotes,funny GST fullforms,shayari & all humorous stuff related to GST. 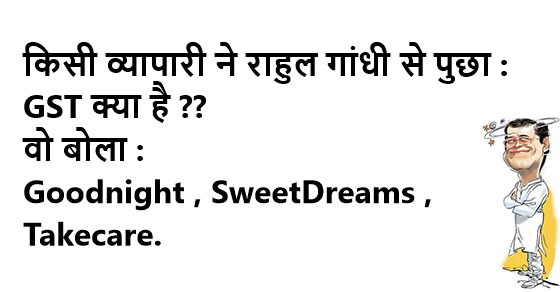 On a lighter Note,

- you've to report everything you do,

- Will keep you busy & Won't let you do any other stuff apart from herself,

- You've to remember dates, failure of which will lead you into problems,

Lord Krishna's Advice to Arjun in Mahabharat
Quote:
"My dear Partha,
Change is the rule of this world!

What we called as Sales Tax till yesterday became VAT today and will be called as GST from tomorrow
There is no need to cry since you haven't lost anything!
Whatever you got,you got it from your customer!

A little boy wanted Rs.50 very badly and prayed for
weeks, but nothing happened.

Finally he decided to write God a letter requesting the Rs.50.

When the postal authorities received the letter addressed to God, INDIA, they decided to forward
it to the President of India as a joke.

The President was so amused, that he instructed his secretary to send the little boy Rs.20.

The President thought this would appear to be a lot of money (Rs.50) to a little boy,
and he did not want to spoil the kid.

The little boy was delighted with Rs...20, and decided to write a thank you note to God,
which read: