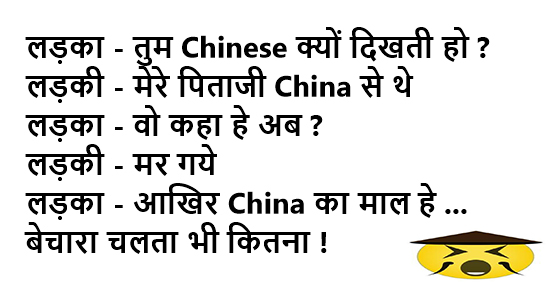 In this post, I'm going to share some funny jokes on china,chinese one liners,India China Jokes,Made in china puns and much more 😀

TIPS TO KNOW IF YOUR PHONE IS A CHINA PHONE
1. It gets full after 3 minutes of charging

3. Text message can be written with a toothpick.

5. When an aeroplane passes; it records one missed call.

Man hires a Chinese Private Investigator, Chen Lee, to watch his wife.
A few days later he gets this report : Sir.
I watch house.
You leave house.
He came to house.

He and she leave house.
I follow.
He and she go hotel.

I climb tree and look in window.
He kiss she.
She kiss he.
He strip.
She strip.

A Chinese and Steven Spielberg were drunk at a bar. Spielberg suddenly slapped the Chinese..
Chinese: why?

Spielberg: Because you bombed Pearl Habour! My father died there!
Chinese: But I'm Chinese, not Japanese.

Spielberg: You fool, Chinese, Japanese, Vietnamese, Tiwanese, you are all the same.
Chinese punched Spielberg.
Chinese: That's for sinking Titanic.

A Ugandan teacher was sent to China to teach. The first day he entered class, he began by roll-
calling. He said "Sheng."A student said, "Present."

The teacher became more confused and he asked, "What is wrong?"
A student stood up and he said,"Sir, I'm not Wrong, I'm called Wong."

The teacher now laughed, "Hahaha!"
A girl said, "Present sir."The teacher came closer to find out what was going on, as he moved
his pen fell on the table and made the sound,
"Ping chung chong!"

Cjec, Tito and John decided to go to China for vacation. Since they were new to the place they had to stay in a hotel. And their room was on the 60th floor. The policy of the hotel was that at midnight
the elevators were shut down. The next day, the guys rented a car and explored the city.

They enjoyed themselves and arrived at the hotel after midnight. The elevators were shut down. There was no other way to get to their room but to climb the stairs all the way to the 60th floor. John said,

”’for the first 20 floors, I will tell jokes to keep us going. Then Tito can say wise stories for the next 20 floors and lastly, we will cover the final 20 floors with sad stories from Cjec.” So,John started with jokes.

With laughs and joy, they soon reached the 20th floor. Tito started saying stories full of wisdom. They
learned a lot before they reached the 40th floor. Now it was time for sad stories.

Everyone in the bank laid down quietly. This is called "Mind Changing Concept” Changing the conventional way of thinking.

When a lady lay on the table provocatively, the robber shouted at her: "Please be civilized! This is a robbery and not a rape!"

This is called "Being Professional” Focus only on what you are trained to do!

When the bank robbers returned home, the younger robber (MBA-trained) told the older robber (who has only completed Year 6 in primary school): "Big brother, let's count how much we got."

The older robber rebutted and said: "You are very stupid. There is so much money it will take us a long time to count. Tonight, the TV news will tell us how much we robbed from the bank!"

This is called "Experience.” Nowadays, experience is more important than paper qualifications!

After the robbers had left, the bank manager told the bank supervisor to call the police quickly. But the supervisor said to him: "Wait! Let us take out $10 million from the bank for ourselves and add it to the $70 million that we have previously embezzled from the bank”.

This is called "Swim with the tide.” Converting an unfavorable situation to your advantage!

The supervisor says: "It will be good if there is a robbery every month."

This is called "Killing Boredom.” Personal Happiness is more important than your job.

The next day, the TV news reported that $100 million was taken from the bank. The robbers counted and counted and counted, but they could only count $20 million. The robbers were very angry and complained: "We risked our lives and only took $20 million. The bank manager took $80 million with a snap of his fingers. It looks like it is better to be educated than to be a thief!"

This is called "Knowledge is worth as much as gold!"

The bank manager was smiling and happy because his losses in the share market are now covered by this robbery.

This is called "Seizing the opportunity.” Daring to take risks!