Our ice cream man was found lying on the floor of his van covered with nuts & hundreds and thousands. 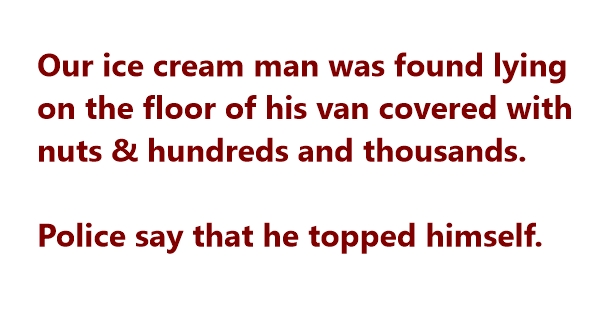 The clerk in the Ice Cream shop saw a customer leaving the drug store across the way, heading for his shop. The customer entered, set a small Thermos container on the counter and unwrapped a condom. "Here, take this condom. Drop a scoop of ice cream in it."

The clerk did so, and handed the condom, with its ice cream content, to the customer. The customer placed the arrangement in the Thermos jug, and capped the jug.
"What," asked the ice cream purveyor, "is the reason for that?"

Why did the little girl's ice cream melt?

She was on fire.

A man walks past an ice cream stand that advertises, ‘Every flavor ice cream in the world.’ ‘Bullsh#t,’ thinks the man and walks in.

‘So you say you have every flavor ice cream in the world? O.K., I would like three scoops of cun+ flavoured ice cream please.’ ‘No problem sir.’

The assistant gives the man three scoops of ice cream in a cone and the man takes a good lick.
Grimacing, he says, ‘This doesn't taste like cun+, it tastes like shit!’

There was an elderly couple who in their old age noticed that they were getting a lot more forgetful, so they decided to go to the doctor. The doctor told them that they should start writing things down so they don't forget.

"Write it down," she told him, and again he said, "No, no, I can remember: you want a bowl of ice cream with whipped cream.

A teacher is teaching a class and she sees that Johnny isn't paying attention, so she asks him, "If there are three ducks sitting on a fence, and you shoot one, how many are left?" Johnny says, "None." The teacher asks, "Why?"

Johnny says, "Because the shot scared them all off." The teacher says, "No, two, but I like how you're thinking."

The teacher says, "The one sucking her ice cream."