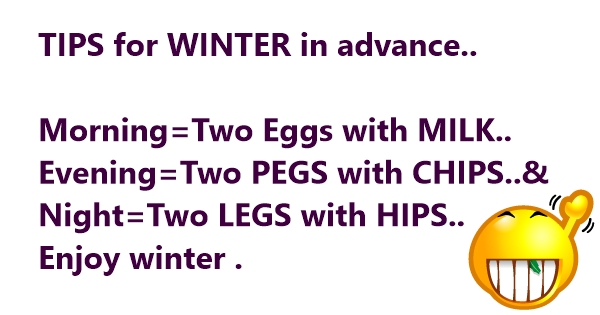 Here is the collection of some of the most hilarious winter jokes,funny winter quotes,winter jokes one liners,pictures...

A little bird was flying south for the winter. It was so cold the bird froze and fell to the ground into a large field. While he was lying there, a cow came by and dropped some dung on him. As the frozen bird lay there in the pile of cow dung, he began to realize how warm he was.

The dung was actually thawing him out! He lay there all warm and happy, and soon began to sing for joy. A passing cat heard the bird singing and came to investigate. Following the sound, the cat discovered the bird under the pile of cow dung, and promptly dug him out and ate him.

TIPS for WINTER in advance..

49. It is so cold people are huddling around Jennifer Lopez, because they heard she was packing heat.
50. It is so cold that even the squirrels had thermal underwear.
51. It was so cold hitchhikers were holding up pictures of thumbs.

52. It was so cold the eye doctor was giving away free ice scrapers with every purchase of a new pair of eyeglasses.
53. It was so cold squirrels in the park were throwing themselves at electric fences.
54. It was so cold Grandpa's teeth were chattering . . . in the glass!

58. It was so cold UN weapons inspectors suddenly decided that chemical weapons might be hidden in Hawaii.
59. It was so cold down at the city morgue, you couldn't tell the stiffs from the guys who worked there.

70. It was so cold when Dad tried to sneak upstairs to bed, the crunching sound under his feet would wake us up.
71. It was so cold my shadow froze to the ground, and when I took a step it snapped right off.
72. It was so cold the politicians stopped blowing hot air.

75. It was so cold the winner of the ice sculpture contest was disqualified when it was discovered he WAS the sculpture.
76. It was so cold we thought Grandpa had grown a beard, but it turned out to be just an icicle of frozen drool.
77. It was so cold kids were telling the most outrageous lies just hoping their pants would catch on fire.

78. It was so cold we couldn't go outside for weeks at a time, and we were hoping that cabin fever would raise our body temperature.
79. It was so cold Scotsmen started wearing pants.
80. It was so cold that when I tried to take the garbage out, it didn't want to go.

81. It was so cold my car wouldn't run and my nose wouldn't stop.
82. It was so cold the flame froze on the candle, so I threw it outside. When it thawed out in the spring, it started a forest fire.

83. It was so cold you could tell how much someone had been crying by the length of the icicles on their cheeks.