Funny Jokes On NASA With Witty Quotes,Memes-Click To Laugh 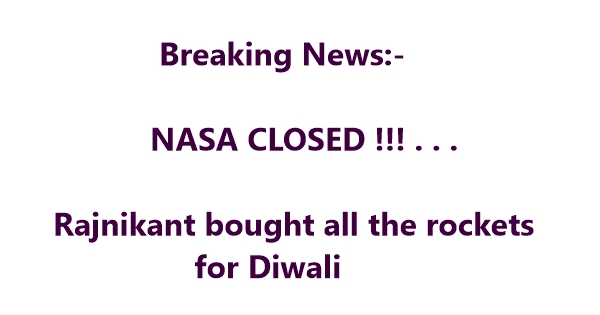 NASA scientists spent a decade and $12 billion to develop a pen that writes in zero gravity, upside down, underwater, on almost any surface including glass and at temperatures ranging from below freezing to 300 C.

Nasa Mars Mission was interviewing professionals. they were planning on sending to Mars.
The touchy part was that only one person could go and it would be a one way trip, the person would never return to earth.

The interviewer asked the first applicant, An engineer, how much he wanted to be paid for going.
"One million dollar," the engineer answered. And i want to donate it all to the poor.


The next applicant was a doctor, and the interviewer asked him the same question.
"Two million dollars," the doctor said. "i want to give a million dollar to my family and leave the other one million dollar for the advancement of medical research."

The last applicant was Akpors a lawyer. When asked how much money he wanted, he whispered in the interviewers ear, "three million dollars."

Why so much money more than the others? The interviewer asked.