Top 7 Jokes On Lecturers & Lectures Including Funny Quotes & One Liners 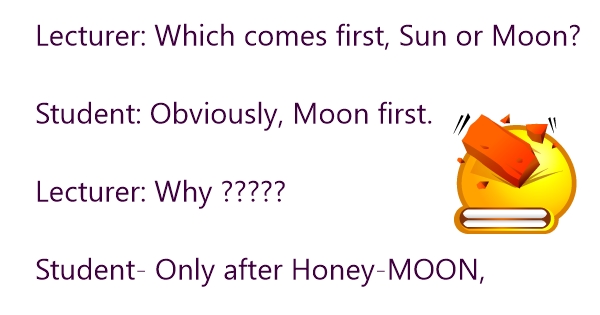 A lecturer teaching medicine was giving a classoom observation. He took out a jar of yellow liquid. "This," he explained, "is urine. To be a doctor, you have to be observant of color, smell, sight, and taste."

After the last student was done, the lecturer shook his head. "If any of you had been observant, you would have noticed that I put my second finger into the jar and my third finger into my mouth."

Student- Only after Honey-MOON,

A lecturer walked into the lecture room and announced that there will be an emergency test, and he went straight to the board to write the instructions as:

3. No cancellation of answer

4. You can open your text book or notebook.

5. Once its 15 minutes raise your pen and walk out of your desk.

He then told the students to get set and he began to dictate the questions one after the other.

One morning, a lecturer entered the class and was so disappointed
to meet not even a single student.


After 30 min, the students started arriving one by one.
The angry lecturer was observing them as they enter.

After the arrival of the last student, the lecturer said
"If you know you came late and you greeted me as you pass the door, fall to the right, 10 strokes of cane for you"

"If you know you came late and you did not greet me as you pass the door, fall to the left, 2 weeks suspension."

"And don't attempt to lie because i was taking record." he added.

After the statement, a class of 20 students, 10 moved to the right while 9 moved to the left remaining only Akpos standing alone.

"Young man! are you claiming you where here before me?" asked the angry lecturer.
Akpos replied "No sir!"

"Then why are you still there?" asked the lecturer.
"because i didn't fall into any category" replied Akpos "Meaning"

A lecturer in a University in Nigeria decided to give his students a test. He asked them to write the answers as he reads out the questions.
Instructions: Cancelling answers not allowed.

Lecturer: Question1. What is your favourite food? [10 mrks]

Lecturer: Question 2. How do you prepare the favourite food u av chosen? [50 marks]

FOREIGN LECTURER's PRIDE: 80% of my
students made A's.

One day a Lecturer was talking about marriage in class…
Lecturer : What kind of wife would you like, Akpos?