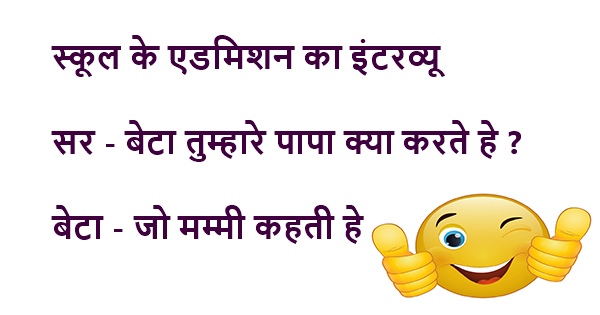 Tortoise and a Rabbit wrote an entrance exam, Tortoise got 80%, Rabbit got 81%.

Both went 4 admission to an engineering college,

Rabbit didn't get admission but the tortoise got admission.

U remember when we were in the 1st std the tortoise won a race.

GIRL: Have you come to collect your book titled "DADDY IS AT HOME?" by Ngozi Okafor

BOY: No, I want that your hymn book called "WHERE SHOULD I WAIT FOR YOU?"

GIRL: I don't have that one but maybe you should take the other one titled "UNDER THE MANGO TREE" by Chimamanda Adichie

BOY: Fine, but don't forget to bring "I WILL CALL YOU IN 5 MINUTES" while coming to school

GIRL: I will also bring you a new one too titled"I WON'T LET YOU DOWN" by Chinua Achebe Then;

DAD: Those books are too many, will he read them all

A Pakistani boy took admission in an American school ...

Teacher : No, now you are in America, your name is Johnny from
today.

Boy went home and mom asked: How was the day Nadir?

Boy : I am an American now, call me Johnny.

Mom and Dad both got offended and beat him up.
Next day he was back to school all bruised ...

Boy: Ma'm, just 6 hours after I became American, I was attacked by two Pakistani terrorists

A Christian, a Muslim and a Buddhist die and arrive at the Gate of Heaven. An Angel (or deva) stops them and asks, "Why do you come here? Can you tell me the reasons why you are allowed to enter Heaven?"

The Christian replies, "My ancestor disobeyed God, and I sinned all my life: I killed, I lied, I cheated my wife and I was greedy. However, Jesus died for me and all my sins are forgiven.

So I deserved to enter Heaven." "OK," replies the Angel, "sounds good, but I must give you an entrance examination before you can enter." The Christian promptly agrees and the Angel asks him: "How to spell God?". It is an easy question and the Christian passes through the Gate.

Next came the Muslim, who says, "I had not done any good or evil things during my life but I was very devout. I prayed to God five times a day. So, I too should enter Heaven." The Angel replied, "It sounds OK to me but I have to give you a test also. How to spell Allah?" Not too bad, and the Muslim passes the test.

Finally, it is the Buddhist turn, who tells the Angel,"I had done all the good things in my life and I followed Buddha's five prescepts: I never killed, I donated to charities, I meditated every day, and I never cheated my boss nor my customers.

Akpos traveled to Lagos after his WAEC result was out so that his Uncle will help him get admission into the University of Lagos to study medicine and become a medical doctor….

The following conversation happened between them:

Akpos: Uncle, I learnt its difficult to get admission into the university these days except you are well connected…

Akpors: Since you are connected, I came to ask you if you can help me get admission into the university after my JAMB….

Uncle: That’s true… i'm connected and I will help u….

Uncle: You welcome…so how is your result, is it WAEC or NECO and how many credits did you get?

Akpors: Uncle, it’s WAEC, I had only two credits in agric and Yoruba language but I failed the rest…

Uncle: Well, that’s not bad… you can still be a doctor, not a medical doctor really but native doctor (babalawo)…
You will use your credit in agric in collecting herbs from the forest, and Yoruba language for incantations…

Mr Akpors once hurt his arm when playing tennis.

His friend told him of this new machine at National Hospital Abuja that could diagnose any problem in a human and prescribe an appropriate remedy.

All it needed was a small sample of body fluid.

Mr Akpors, skeptical, went to test it out.

He put in some of his blood in the small container he was given and put it in the machine.

The results came out instantaneously and said,

"You have a tennis arm. Rub with ointment and soak in warm water daily."

He was genuinely impressed.

But, he thought he could trick the machine and confuse it.

He went home and mixed up different things.

He put in his dog's urine, his daughter's spit, a bit of his wife's blood (He told her it was just a test) and finally his semen.

He went back to the machine the next day and put in the mixture he'd made.

The machine was quiet for a while.

He's still on admission in at the same National Hospital after a heart attack.