Funny Jokes About All Super Heroes With Pictures

After fighting some crime, Superman wanted to score some action. He flew over to Wonder Woman's apartment to see if she was available. As he landed on her balcony, he saw Wonder Woman naked on the bed with her legs wide open.

Superman thought to himself, "I'm faster than a speeding bullet; I could be in there, have sex, and be out again before she knew what happened." So Superman did his super thing in a split second and flew off happily. 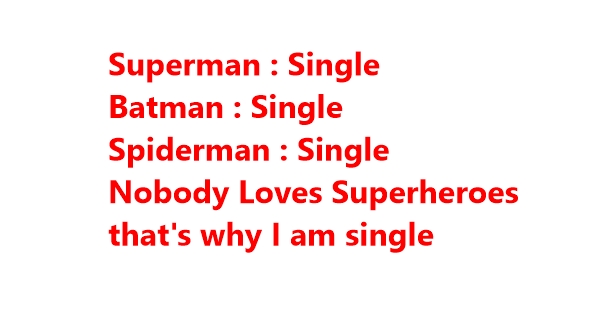 Pinocchio, Snow White and Superman are out for a stroll in town one day.

As they walk, they come across a sign: "Beauty contest for the most beautiful woman in the world."

"I am entering," says Snow White..

After half an hour she comes out and they ask her, "Well, how'd ya do?"

They continue walking and they see a sign: "Contest for the strongest man in the world."

After half an hour he returns and they ask him, "How did you make out?"

"First Place," answers Superman. "Did you ever doubt?"

They continue walking when they see a sign: "Contest! Who is the
greatest liar in the world?"

Pinocchio says, "this is mine!"

Half an hour later, he returns with tears in his eyes.

"What happened?" they ask.