Fart Jokes With Funny One Liners,Quotes,Pictures 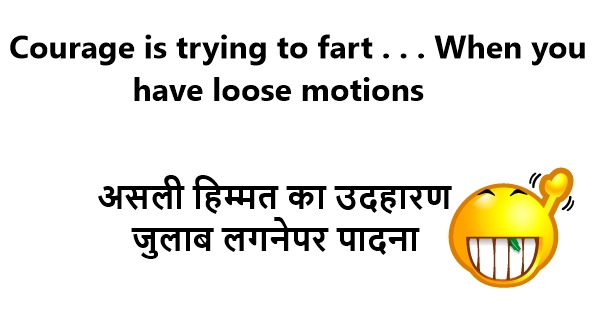 Courage is trying to fart . . . When you have loose motions

Do you fart in bed ?

This is a story about a couple who had been happily married for years, the only friction in their marriage was the husband’s habit of farting loudly every morning when he awoke the noise would wake his wife and the smell would make her eyes water and make her gasp for air.

Every morning she would plead with him to stop ripping them off because it was making her sick. He told her he couldn’t stop it and that it was perfectly natural. She told him to see a doctor, she was concerned that one day he would blow his guts out.

The years went by and he continued to rip them out. Then one Christmas day morning, as she was preparing the turkey for dinner and he was upstairs sound asleep, she looked at the innards, neck, gizzard, liver and all the spare parts, and a malicious thought came to her.

She took the bowl and went upstairs where her husband was sound asleep and, gently pulling the bed covers back, she pulled back the elastic waistband of his underpants and emptied the bowl of turkey guts into his shorts.

Sometime later she heard her husband waken with his usual trumpeting which was followed by a blood curdling scream and the sound of frantic footsteps as he ran into the bath room.

The wife could hardly control herself as she rolled on the floor laughing, tears in her eyes! After years of torture she reckoned she had got him back pretty good.

About twenty minutes later, her husband came downstairs in his blood stained underpants with a look of horror on his face. She bit her lip as she asked him what was the matter. He said, “Honey you were right… all these years you have warned me and I didn’t listen to you.” “What do you mean?” asked his wife. “Well, you always told me that one day I would end up farting my guts out, and today it finally happened,

Three eskimo were talking about how cold it was when one mentioned that his igloo was as cold as he could remember. The eskimo said, “Come to my igloo and I’ll show you how cold it is.” So the three men trodded off to the igloo and there they found a can of beer frozen solid.


The second eskimo said, “My igloo is much colder than this; come over and see what I mean.” So they took off for the second eskimo’s igloo to find that a fresh pot of hot coffee froze as it was poured into a cup.

The third eskimo said, “That’s not cold, my igloo is so much colder than both of yours. Come over and see.” So they tracked through the snow to the third igloo where the eskimo pulled down the furs on his bed. The other two eskimo stared in amazement at 3 frozen balls that lay on the bed.

This is definitely one story you must read and pass on. Especially if you need a good laugh:

Like everything in life, farts have a time and place. However, I never realized that in the wrong time and place, flatulence had enough power to alter my course in history.

Well, it can if it’s the third date with the man of your dreams. And, if it makes his eyes burn. If God destined us to be together, I was one SBD away from foiling His plans (that’s “Silent But Deadly” for you prudes).

It was about five years ago. I was trying to lose a few pounds so I was staying away from carbs. That’s when I met my husband, Rob. On our first date, he booked the next two. He liked me. I liked him. Things were looking real good.

He picked me up in a Cobra, Mustang and his pathetic attempt to win me over with a car totally worked. I’m not shallow, but since I spent most of my twenties picking men up because

I didn’t want my hair to frizz in their non-air conditioned jalopies on 3 wheels and a 15 year old spare, I welcomed his fancy sports car with open arms.

We arrived at the restaurant and Rob was ordering food I hadn’t allowed myself to eat in years. I didn’t want to be “that girl” so I ate, drank, and oh, was I merry. Later we shopped a bit.

Rob surprised me by buying an expensive pair of shoes that he caught me eyeing. Was this love?

That’s when it happened. Gas strikes in two different ways – uncontrollable toots or sharp, shooting pains that feel a lot like dying. I thought I was dying. Not to make a scene, I told Rob I suddenly wasn’t feeling well and probably needed to head home.

On the way home in his Cobra, he tried to hold my hand and ask me lots of questions, but I wasn’t having any of it. The pain was so bad it felt like I was being stabbed with a bunch of tiny forks. Then I realized …

My God, help me. I have a horrendous fart on deck. I’m in trouble. Big trouble.

HOW DO YOU TELL A MAN YOU JUST STARTED DATING, THAT THE REASON YOU ARE WRITHING IN PAIN IS BECAUSE YOU HAVE TO FART.

The more I held it in, the more pain would shoot through my stomach and down my legs. I was even having to raise myself off the seat, gripping on to my door and the dashboard.

“Seriously, you need to hurry – I’m in a lot of pain.” I managed to say through gritted teeth.

How do you tell a man you just started dating that the reason you’re writhing in pain is because you have to fart?

Well, you can either tell him, or like me, let the fart speak for itself.

People, hear me. There was nothing I could do. As impressive as I am with sphincter control, this was out of my hands. Slowly, it eeked out. The more I tried to stop it, the more it forced its way through the door. However, to my pleasant surprise, there was no sound.

I sat silently, sweat accumulating above my upper lip. Ok, maybe I got away with it. Maybe I’m home free. Then it hit me. Not an idea, a cloud. A horrific, fart cloud. Not in a, “am I smelling something?” sort of way. More like a “is someone dead and rotting in your trunk and am I in hell?” sort of way.

Suddenly, I panicked. “Roll down the windows!” I screamed (yes, I literally screamed it like I was in a horror movie).

“What? Why?” Rob asked, starting to freak out because I was freaking out.

“I can’t roll down the windows, unlock it! UNLOCK IT!”

“What’s going on?” Rob yells back to me, “Why are you …” then it hit him. I could see it in his eyes. Was it surprise? Horror? Water started to accumulate at the base of his eyelids, “Oh my God, I CAN TASTE IT!” he screamed.

“Roll down the windows!” As I screamed, the toots started to flood out uncontrollably. I scratched and clawed at the window like I was being kidnapped. Rob, unable to see either by fart cloud or panic, kept turning on the windshield wipers instead of unlocking the window.

Finally he was able to hit the right control and he rolled down our windows. We both gulped in fresh air. I was horrified, yet happy to be alive, then remembered I just farted on the man of dreams, then sorta wished I was dead.

We sat silently for the rest of the way home. Although the shooting pains had subsided, I now desperately needed to use the bathroom, in an urgent, explosive kind of way.

He pulled up to my apartment and before he could come to a stop I had already jumped out, “Ok, thanks for dinner, sorry about the fart, love the shoes!” and ran in to my apartment like I was running from the cops.

I burst through my door and ran straight for the bathroom, where I was finally able to unleash and make noises that no one should ever, EVER, hear coming from another person.

Then I heard it. Rob’s voice. Right. Outside. My. Bathroom. Door.

“Anna? You left your shoes in my car and your front door was open. Where do you want me to put them?”

“Get away from the door!” I scream like Reagan from The Exorcist.

This man! I mean, I love him, but take a freakin’ hint!

Finally, I heard the front door shut, and the Cobra engine zoom away. I thought that was the last I’d hear from him. I didn’t think it was possible to ever see a man again after he screams he can taste your fart after only knowing you for 48 hours.

Ghost tatti (s h i t ) : The kind where you feel the tatti come out, but there is no tatti in the toilet.

Clean tatti : The kind where you tatti it out, see it in the toilet, but there is nothing on the toilet paper.

Wet tatti : The kind where you wipe your butt 50 times and it still feels unwiped, so you have to put some toilet paper between your butt and underwear so you wont ruin them with a stain.

Second Wave tatti : This happens when youre done tatti-ing and youve pulled up your pants to your knees, and you realize that you have to tatti some more.

Pop-A-Vein-In-Your-Forehead-tatti : The kind where you strain so much to get it out, you practically have a stroke.

Gassy tatti : Its so noisy, everyone within earshot is laughing.

Drinker tatti : The kind of tatti you have the morning after a long night of drinking. Its most noticeable trait is the skid marks on the bottom of the toilet.

Lincoln Log tatti : The kind of tatti that is so huge youre afraid to flush without first breaking it into little pieces with the toilet brush.

Gee-I-Wish-I-Could-tatti tatti : The kind where you want to tatti but all you do is sit on the toilet and fart a few times.

Spinal Tap tatti : Thats where it hurts so badly coming out, you would swear it was leaving you sideways.

Wet Cheeks tatti (The Power Dump) : The kind that comes out of your butt so fast, your butt gets splashed with water.

Liquid tatti : The kind where yellowish-brown liquid shoots out your butt and splashes all over the toilet bowl.

Mexican tatti : It smells so bad your nose burns.

The Surprise tatti : Youre not even at the toilet because you are sure youre about to fart, but oops.......a tatti!!!