May 02, 2016
"You know you are a coffee addict when you grind your beans in your mouth" 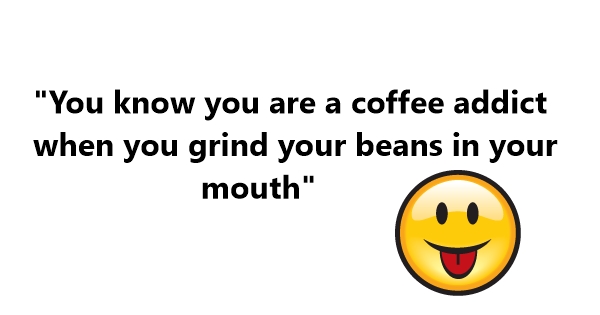 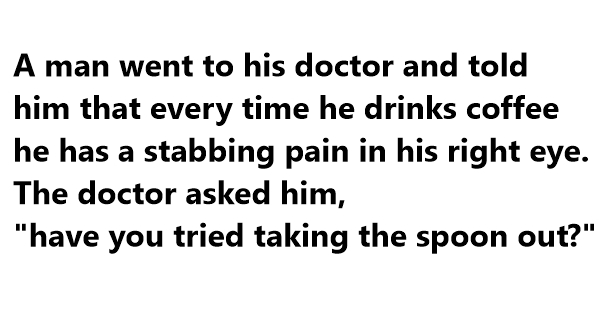 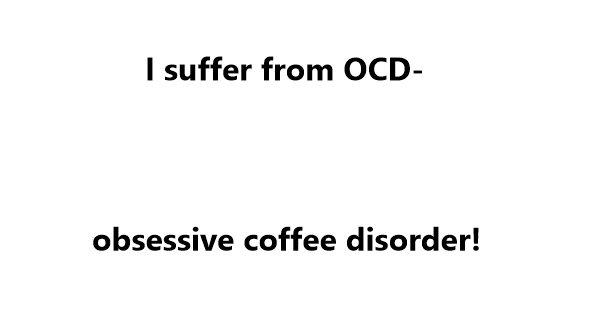 You Should STOP drinking coffee if:

You chew on other people's fingernails.

You can type sixty words per minute with your feet.

You short out motion detectors.

You help your dog chase its tail.

All your kids are named "Joe".

You name your cats "Cream" and "Sugar."

You pour coffee on a choking victim because CPR stands for "Coffee Provides Resuscitation."

You can jump-start your car without cables.

You forget to unwrap candy bars before eating them.

You walk ten miles on your treadmill before you realize it's not plugged in.

You channel surf faster without a remote.

You're so wired, your ears pick up AM radio.

You can outlast the Energizer bunny.

Your doctor tells you, your blood type is COFFEE

The only time you're standing still is during an earthquake.

Your eyes stay open when you sneeze.

You answer the door before people knock.

Your morning cup of Coffee is so strong it wakes up the neighbors!

You think on the eighth day God created coffee.

A mother wakes up one morning to the smell of coffee, she walks to the kitchen to find her young son sitting with a cup of coffee. He smiles and greets her then hands her the cup saying he wanted to surprise her,

the mother wearily takes a sip and is delighted to find its just how she likes it, so much so she downs it all until she feels something touch her lips.

What did the mama coffee bean say to her kid who was too wired on caffeine to go to sleep?

Just after this guy gets married, he was invited out for a night with 'the boys.' He accepts and then tells his new bride not to worry, because he'd 'be home by midnight...promise!'

Well, the darts were landing just right and the grog was going down easy, and at around 3 a.m. drunk as can be the guy finally stumbles home. Just as he gets in the door, the cuckoo clock started, and cuckooed three times.

Quickly he realized she'd probably been woken up by the clock, so he cuckooed another nine times to make her think it was midnight. He was really proud of himself, having the quick wits, even when smashed, to escape a possible conflict.

Next morning the missus asked him what time he got in and he tells her, '12 o'clock, dear!' Whew! Got away with that one!

'Hmmm, I think we need a new cuckoo clock,' she says over her morning coffee.

'Why is that?' the husband asks.

Four Catholic men and a Catholic woman were having coffee in St. Peter's Square.
The first Catholic man tells his friends, "My son is a priest. When he walks into a room, everyone calls him 'Father'."

The second Catholic man chirps, "My son is a bishop. When he walks into a room people call him 'Your Grace'."

The third Catholic gent says, "My son is a Cardinal. When he enters a room everyone bows their head and says 'Your Eminence'."

The fourth Catholic man says very proudly, "My son is the Pope. When he walks into a room people call him 'Your Holiness'."

Since the lone Catholic woman was sipping her coffee in silence, the four men give her a subtle, "Well... ?"