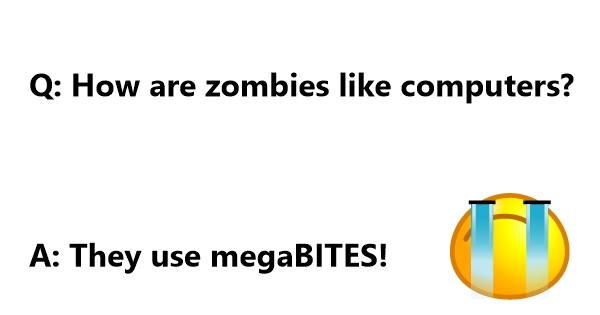 
Funny Story About A Zombie

A zombie, a priest, and an atheist walk into a bar. They all sit down at a table. The waiter comes over, gives the odd group a strange look, but says nothing as he takes their orders.

The priest orders a glass of Sherry, the atheist orders a beer, and the zombie orders a Bloody Mary (of course). A few minutes later the waiter returns, but this time he can't hold his tongue any longer. So he turns to the zombie and asks:

"So, as a member of the undead, which of these two gents do you identify with most?"

"With me, of course!" says the priest. "Because clearly God has granted him unending life."

"He's with me," says the atheist, "because surely if there were a God, he wouldn't curse a man like this."

The zombie looks from the priest to the atheist and back again. Finally he reaches across the table, grabs each man by the collar, drags them close to him, and proceeds to feast on them both while the waiter and the other people inside the bar stare on in silent horror.

Once done, the zombie tosses the remains of the carcasses aside and begins licking his fingers with a lipless grin.

After a few moments he remembers that the waiter is still standing nearby. He looks up at the young man and shrugged. 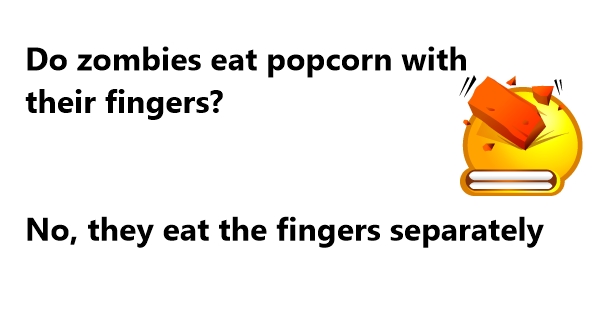 ZOMBIE: why do you keep on striking me with your peas that will eventually shoot me to death when i only wanted to be near you?

WhaT Happens When a Zombie Meets a Politician ???

Zombies refuse to Brainnnn Them. 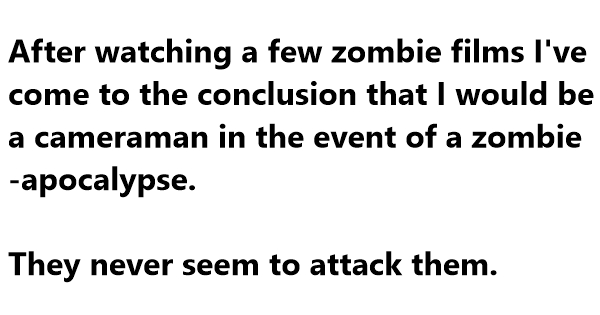 After watching a few zombie films I've come to the conclusion that I would be a cameraman in the event of a zombie-apocalypse.