SARAH PALIN: The chicken crossed the road because, gosh-darn it, he's a maverick!... 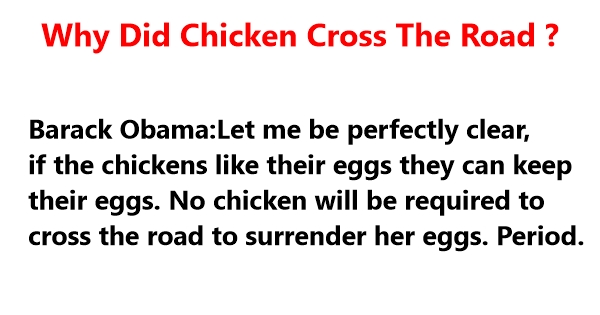 BARACK OBAMA: Let me be perfectly clear, if the chickens like their eggs they can keep their eggs. No chicken will be required to cross the road to surrender her eggs. Period.

JOHN McCAIN: My friends, the chicken crossed the road because he recognized the need to engage in cooperation and dialogue with all the chickens on the other side of the road.

HILLARY CLINTON: What difference at this point does it make why the chicken crossed the road.

GEORGE W. BUSH: We don't really care why the chicken crossed the road. We just want to know if the chicken is on our side of the road or not. The chicken is either with us or against us. There is no middle ground here.

COLIN POWELL: Now to the left of the screen, you can clearly see the satellite image of the chicken crossing
the road.

BILL CLINTON: I did not cross the road with that chicken.

AL GORE: I invented the chicken.

JOHN KERRY: Although I voted to let the chicken cross the road, I am now against it! It was the wrong road to cross, and I was misled about the chicken's intentions. I am not for it now, and will remain against it.

AL SHARPTON: Why are all the chickens white?

OPRAH: Well, I understand that the chicken is having problems, which is why he wants to cross the road so badly. So instead of having the chicken learn from his mistakes and take falls, which is a part of life, I'm
going to give this chicken a NEW CAR so that he can just drive across the road and not live his life like the rest of the chickens.

ANDERSON COOPER: We have reason to believe there is a chicken, but we have not yet been allowed to have access to the other side of the road.

NANCY GRACE: That chicken crossed the road because he's guilty! You can see it in his eyes and the way he walks.

PAT BUCHANAN: To steal the job of a decent, hardworking American.

MARTHA STEWART: No one called me to warn me which way the chicken was going. I had a standing order at the Farmer's Market to sell my eggs when the price dropped to a certain level. No little bird gave me any insider information.

ERNEST HEMINGWAY: To die in the rain, alone.

BARBARA WALTERS: Isn't that interesting? In a few moments, we will be listening to the chicken tell, for the first time, the heart warming story of how it experienced a serious case of molting, and went on to accomplish its lifelong dream of crossing the road.

ARISTOTLE: It is the nature of chickens to cross the road.

JOHN LENNON: Imagine all the chickens in the world crossing roads together, in peace.

BILL GATES: I have just released eChicken2014, which will not only cross roads, but will lay eggs, file your important documents and balance your checkbook. Internet Explorer is an integral part of Chicken 2014. This new platform is much more stable and will never reboot.

ALBERT EINSTEIN: Did the chicken really cross the road, or did the road move beneath the chicken? 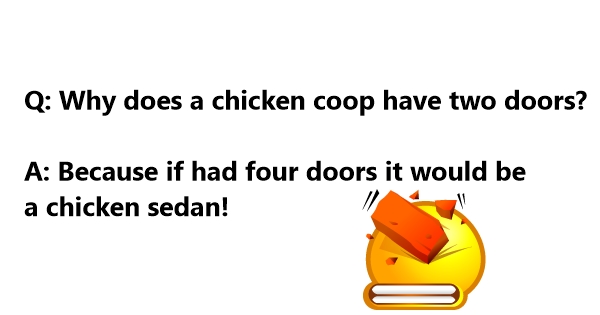 Q: Why does a chicken coop have two doors?
A: Because if had four doors it would be a chicken sedan!

Ralph came home drunk one night, slid into bed beside his sleeping wife, and fell into a deep slumber.


He awoke before the Pearly Gates, where St. Peter said, ’You died in your sleep, Ralph.’
Ralph was stunned. ’I’m dead? No, I can’t be! I’ve got too much to live for. Send me back!’

St. Peter said, ’I’m sorry, but there’s only one way you can go back, and that is as a chicken.’
Ralph was devastated, but begged St. Peter to send him to a farm near his home. The next thing he knew, he was covered with feathers, clucking, and pecking the ground.

A rooster strolled past. ’So, you’re the new hen, huh? How’s your first day here?’
’Not bad,' replied Ralph the hen, but I have this strange feeling inside. Like I’m gonna explode!’
’You’re ovulating,’ explained the rooster. ’Don’t tell me you’ve never laid an egg before? ’
"Never," said Ralph.

Well, just relax and let it happen, says the rooster. ’It’s no big deal.’
Ralph did, and a few uncomfortable seconds later, out popped an egg!
Ralph was overcome with emotion as he experienced motherhood. He soon laid another egg -- his joy was overwhelming.

About an hour later, the chicken walks in again and says "book, book, book," so once again, the librarian gives the chicken three books and it walks out.

About an hour later, it comes back in and says "book, book, book," so the librarian gives the chicken three books and it walks out.

A mother used to cook chicken every day for her kids.one day the kids got fed up.

* Girl: I'm going to tell mum to stop cooking chicken
* Boy: Why?
* Girl: I've started growing small feathers down there
* Boy: Eeeeeh! I thought I was the only one!
* Girl: You too! See mine, they are so many! Show me yours
* Boy: (taking his shorts down) See what mum is doing to us with her daily chicken?
* Girl: Eeeeh! You don't only have feathers, you also have a neck of a hen!!
* Boy: hmmmm! Not only a neck, grab down the neck you will see two eggs. I'm scared am gonna
start laying eggs soon oh!

A rasta went to a Caribbean restaurant and ordered, rice and peas with stew chicken...Then suddenly a Jamaican rasta man in the restaurant turn round and say, "Lion a really chicken yu a order? A vegetable di "I" fi a eat..." The rasta replied to the Jamaican rasta man," Yeh mon a chicken mi order because mi neva see a LION eat GRASS". :D

She can't speak Spanish.
Each time she wants 2 buy chicken legs,
she would lift her skirt &

show her thighs to
enable the seller understnd her.
This went on for sometime.

One day she wanted to buy banana...
She took her husband to the shop...

Do u Know Why?

Bcz her husband can speak Spanish and could ask for Banana in spanish !

Why did the turkey cross the road?
Answer: to prove he wasn't Chicken. 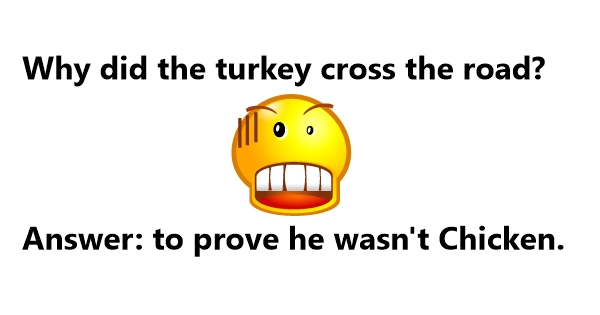 Who’s the father of the chicken?
Chiken ka-bab

Who’s the mother of the chicken ?
Chicken kima

How do u tell a chicken to call u on your mobile?
Kalmi kabab

What happens when a chicken takes a bath ?
Chicken showerma