"Very good," said her mother.
"Is it because I'm blonde, Mommy?"
"Yes, it's because you're blonde," her mother replied.

"Very good," said her mother.
"Is it because I'm blonde, Mommy?" "Yes, pumpkin, it's because you're blonde."

The next day the girl came skipping home from school. "Mommy, Mommy," she yelled, "we were in gym class today, and when we showered, all the other girls had flat chests, but I have these!" And she lifted her tank top to reveal a pair of 36Cs.

Our teacher asked what my favorite animal was, and I said, "Fried chicken."

She said I wasn't funny, but she couldn't have been right, because everyone else laughed.

My parents told me to always tell the truth. I did. Fried chicken is my favorite animal.

I told my dad what happened, and he said my teacher was probably a member of PETA. He said they love animals ........very much.

I do, too. Especially chicken, pork and beef. Anyway, my teacher sent me to the principal's office.

I told him what happened, and he laughed, too. Then he told me not to do it again.

The next day in class my teacher asked me what my favorite live animal was.

She sent me back to the principal's office. He laughed, and told me not to do it again.

I don't understand. My parents taught me to be honest, but my teacher doesn't like it when I am.

Today, my teacher asked me to tell her what famous person I admired most.

Remember your school Life once again :)

A certain private school was faced with a unique problem, where a number of 12-year-old girls were beginning to use lipstick. They wud apply it in the bathroom, which was fine. But after that they would press their lips on the mirror leaving dozens of little lip prints.

Finally the principal decided that something had to be done.

She called all girls to the bathroom and met them there with the maintenance janitor. She explained that all these lip prints were causing a major problem for the custodian who had to clean the mirrors every night (you can just imagine all the yawns from the little princesses).

He took out a long-handled mop, dipped it in the toilet, and cleaned the mirror with it.

Since then, there have been no lip prints on the mirror.

1. Pick up the paper n fall in the dust-bin!
2. Both of you three, stand together separately!
3. Will u hang that calendar or I'll "HANG MYSELF!"
4. Tomorrow call ur parents especially mother and father!
5. Why r u luking at the monkey outside when Im in the class...?
6. I have 2 daughters: both r girls.
7. Stand in the middle of the corner! 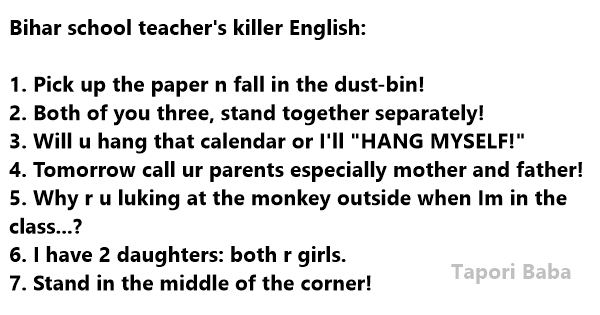 4 friends meet 30 years after school. One goes to the toilet, while the other 3 start to talk about how successful their sons became.

No. 1 says his son studied economics became a banker and is so rich he gave his best friend a ferrari.

No. 2 said his son became a pilot, started his own airline, became so rich he gave his best friend a jet.

No. 3 said his son became an engineer started his own development company, became so rich he build his best friend a castle.

No. 4 came back from toilet and asks what the buzz is about. They told him they were talking about how successful their sons became and ask him about his son. He said his son is gay and is a stripper at a gay bar. Other 3 said he must be very disappointed with his son for not becoming successful.

Oh no, said the father, he is doing good. Last week was his birthday and he got a ferrari, a jet and a castle from 3 of his boyfriends.

Why didn't the spider go to school?
Because she learned everything on the web. 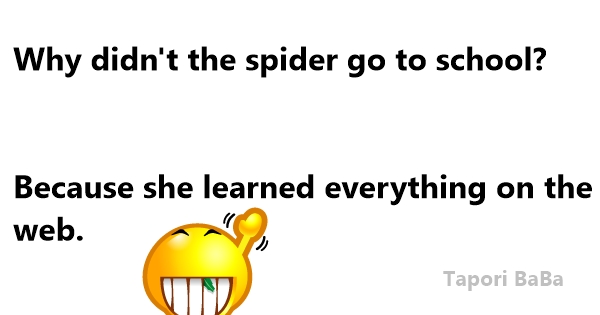