March 05, 2016
An Afganistani boy took admission in an American school ...

Teacher : No, now you are in America, your name is Johnny from today.

Boy went home and mom asked: How was the day Nadir?

Boy : I am an American now, call me Johnny.

Mom and Dad both got offended and beat him up.

Next day he was back to school all bruised ...

Boy: Ma'm, just 6 hours after I became American, I was attacked by two Afganistani terrorists :D 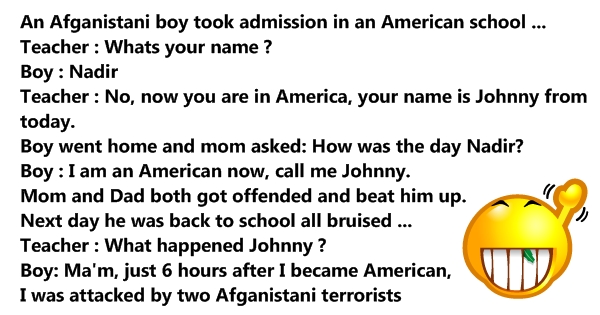 Announcement in a Afghani SCHOOL:

"Students who've Parked their
cycles in front of d Gate, Plz move their cycles
to the Parking area!! After 30 mins another... announcement: "The 400 students who went to move 10 cycles plz come back to classes!" -THATS SCHOOL LIFE AT ITS BEST! 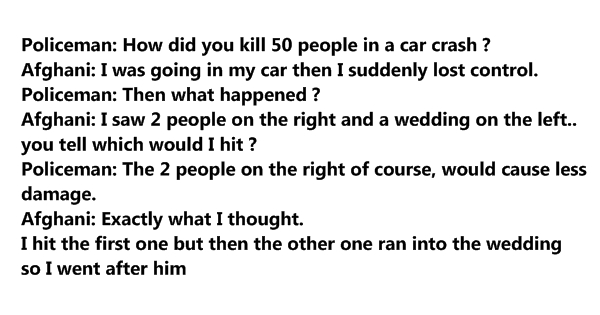 Policeman: How did you kill 50 people in a car crash ?
Afghani: I was going in my car then I suddenly lost control.
Policeman: Then what happened ?
Afghani: I saw 2 people on the right and a wedding on the left..you tell which would I hit ?
Policeman: The 2 people on the right of course, would cause less damage.
Afghani: Exactly what I thought.
I hit the first one but then the other one ran into the wedding so I went after him ! :D