The next day, there's a knock on the door and there stands before him a voluptuous, athletic, 19 year old babe dressed in nothing but a pair of Nike running shoes and a sign around her neck..

She introduces herself as a representative of the weight loss company. The sign reads, "If you can catch me, you can have me."...


Without a second thought, he takes off after her. A few miles later puffing and puffing, he finally gives up. The same girl shows up for the next four days and the same thing happens. On the fifth day, he weighs himself and is delighted to find he has lost 5lbs as promised.

He calls the company and orders their 5-day/10lbs program. The next day there's a knock at the door and there stands the most stunning, beautiful, sexy woman he has ever seen in his life. She is wearing nothing but Reebok running shoes and a sign around her neck that reads, "If you catch me you can have me".

Well, he's out the door after her like a shot. This girl is in excellent shape and he does his best, but no such luck. So for the next four days, the same routine happens with him gradually getting in better and better shape.

Much to his delight on the fifth day when he weighs himself, he discovers that he has lost another 10lbs as promised. He decides to go for broke and calls the company to order the 7-day/25 lbs program.

"Are you sure?" asks the representative on the phone. "This is our most rigorous program." "Absolutely," he replies, "I haven't felt this good in years."

The next day there's a knock at the door; and when he opens it he finds a huge muscular guy standing there wearing nothing but pink running shoes and a sign around his neck that reads, "If I catch you, you are mine." 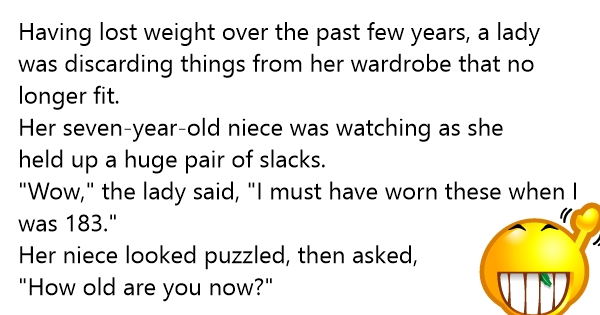 Having lost weight over the past few years, a lady was discarding things from her wardrobe that no longer fit.

My wife is on a tropical food diet, the house is full of the stuff.

It's enough to make a mango crazy. 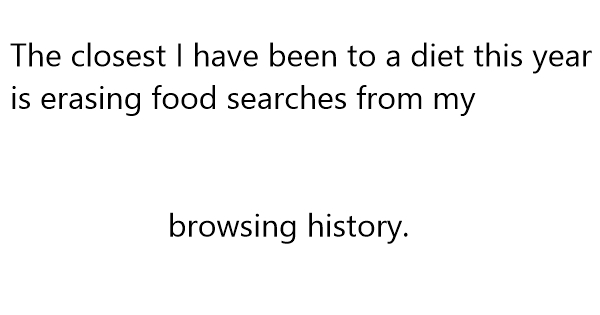 The closest I have been to a diet this year is erasing food searches from my browsing history.

I was at Walmart today to buy my dog a large bag of Purina dog food….While waiting in the checkout line a woman behind me asked if I had a dog…..I'm thinking, what do you think lady….

No I have a pet elephant at home….Since I had nothing better to do than entertain myself, on impulse, I told her I didn't have a dog but I was again starting the Purina Diet.

I then quickly added that I probably shouldn't because I ended up in the hospital the last time I did this diet…. I lost 27 lbs. but awoke in the intensive care unit with tubes coming out of my nose and mouth and an IV in my arm…..

Everyone in line at the store was throughly enthralled in my story by this point…I told her it was essentially a perfect diet and the way it works was so simple….

Load your pockets with Purina Nuggets and eat one or two whenever you are hungry…The food is nutritionally balanced and it worked so well I thought I'd try it again.... 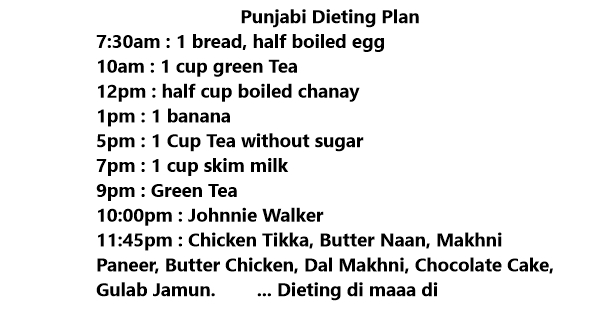