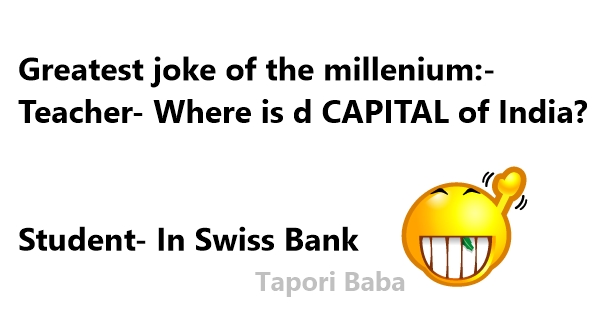 Narendra Modi to lead the BJP campaign for 2014, the Congress decided their leaders 42 years back.

Robert Vadra grows food for everybody; Sonia distributes food to everybody; Rahul eats food from everybody.

Robert Vadra could say - "How can Kejriwal accuse me of corruption? Whatever I did to make all this money, was entirely in-law."


Pranab is doing this all wrong. In Pratibha Patil's time, no one tried  to protest outside Rashtrapati Bhavan. Because she was never home.

Now some Coalgate files are missing. Why can't they store files in a safe place? Perhaps, wherever they store their clean chits.

PA: Sir, people are saying Modi's speech was better than yours. MMS: Arey chill. Wait for Jan 30. I'll thulp him in the 2-minute silence.

Food Security Bill is an awesome  mechanism to ensure that Rahul Gandhi gets something to eat the next  time he piles on to a Dalit household.